The weekend game saw us fight a historical battle between Boudica's Britons v Suetonius Paulinus Romans in what was to be Boudica's final battle fought somewhere in the East Midlands using the rules Hail Ceaser. The Brittons heavily out number the Roman forces. The British army consists of Iceni, Trinovantes, Catuvellauni and Corieltavi, represented by four war bands each with chariots and light cavalry and skimishers, the Romans have 3 divisions represented by  2 divisions of auxiliary troops and 1 division of Roman legionaries  represented by four units. I decided to take use of the Romans and my dad the Britons,the Roman objective was to break two of the four British War bands and the Britons had to break the Roman leigion. With the armies set up it looked very daunting been a Roman as the British army seemed massive in comparison, however there was a lot of ground to cover for the British so it was going to be hard for them to keep the army under control, well at least that was what I was hoping.....,,,,,,,
The Britons deployed ready to move forward on mass, the Roman legions are deployed on the hill flanked by the auxiliary troops. 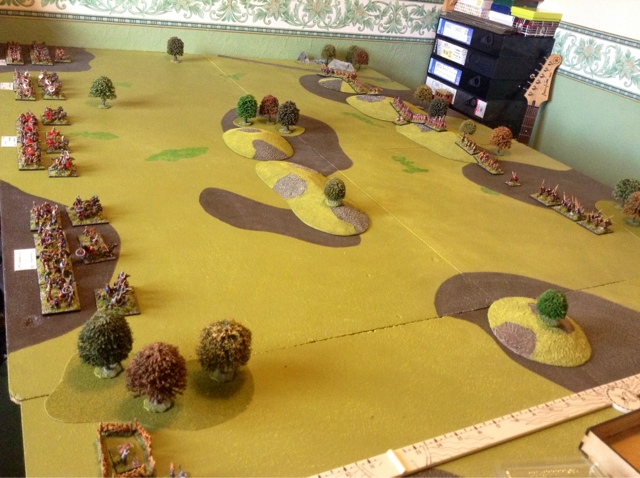 After a few turns Boudica's chariots break the Auxiliary Medium cavalry  and start to Harass the Roman right flank. The Romans return fire power fails to make any impact. 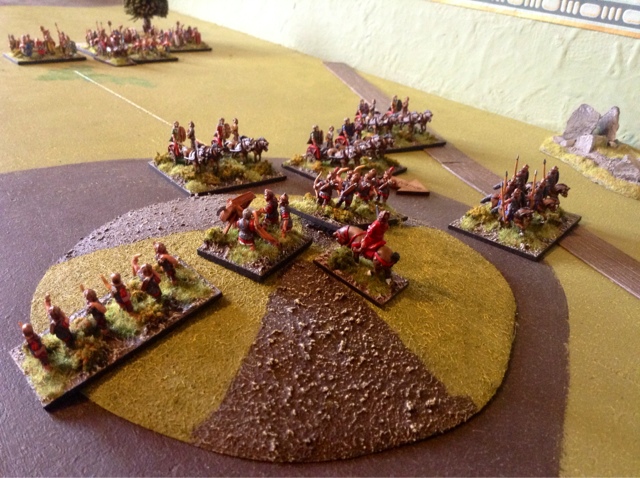 The Britons battle line is very staggered, this was around turn four. On the right flank the command rolls were very poor, at one stage the War bands went back over as the result of a command blunder leaving Boudica's war bands and chariots well ahead of the advance.
The Roman Auxiliary Cavalry on the Roman left flank pushed up to the middle of the table to take advantage of the war bands slow progress to further hamper their progress 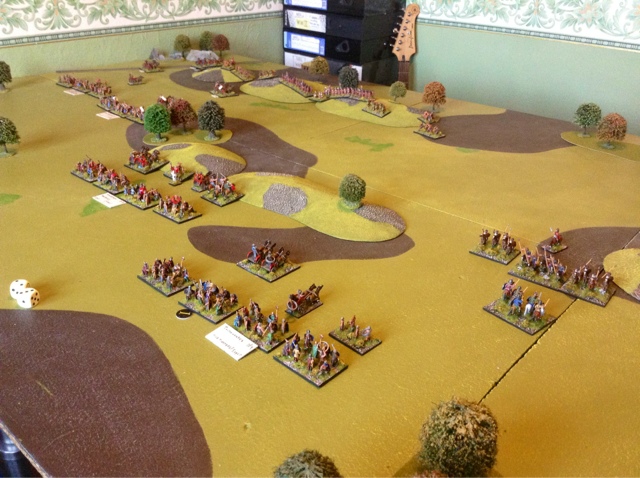 The Roman Legions wait on the crest of the hill, their time to prove themselves in battle was approaching. 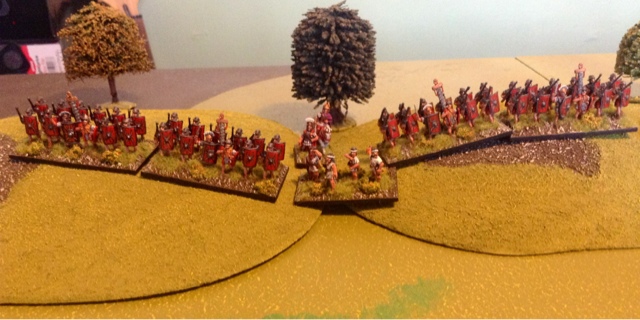 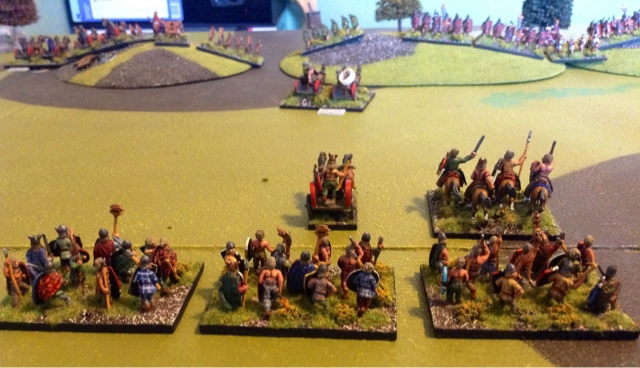 The British right flank just refused to move depriving my dad of some much needed fighting power.
The War band in the centre was also making very slow progress thanks to another blunder command roll, retreating back behind the hill...... I was beginning to think these Britons weren't to scary after all! 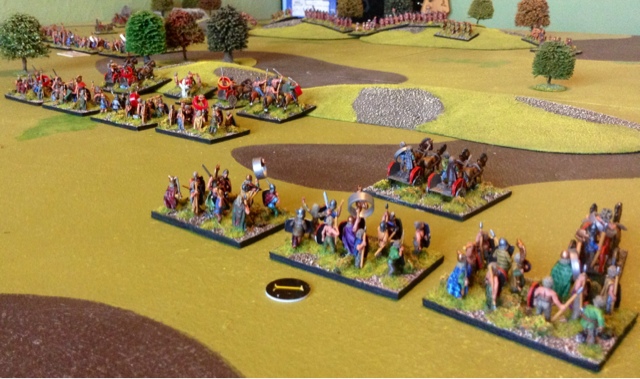 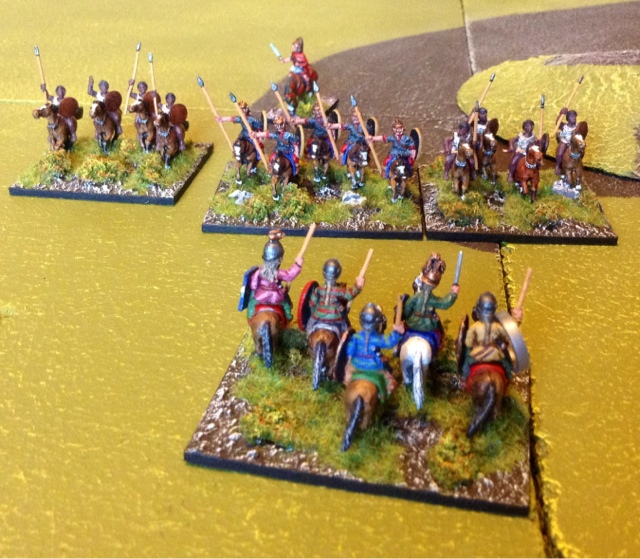 Boudica's Britons are almost in charge range, some stern resistance from the Roman archers held the chariots up for a while even breaking one unit in combat. 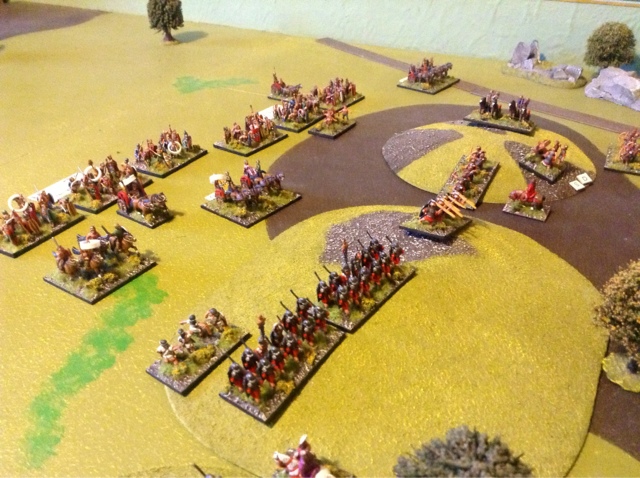 As the War bands crash into the Roman lines the archers are finally destroyed, however despite suffering heavy casualties the Auxiliary spearman break a war band driving them back own the hill, a bonus as my legions have not been scratched yet. 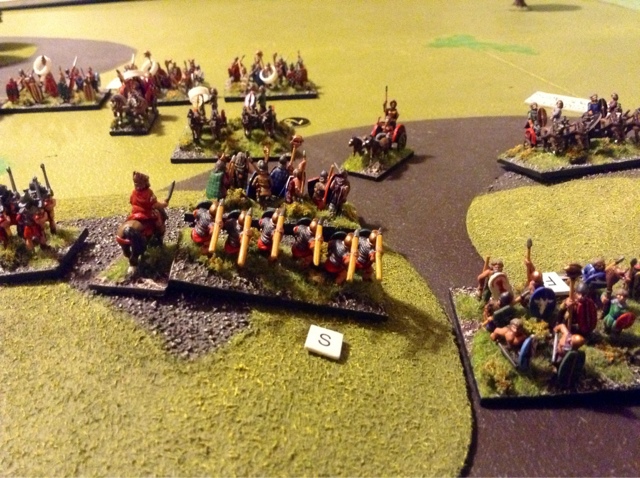 The Roman cavalry continue to disrupt the Britons right flank, although they were to be eventually broken they had done there job of slowing the Britons advance and keeping these war bands away from the more important legions on the hill 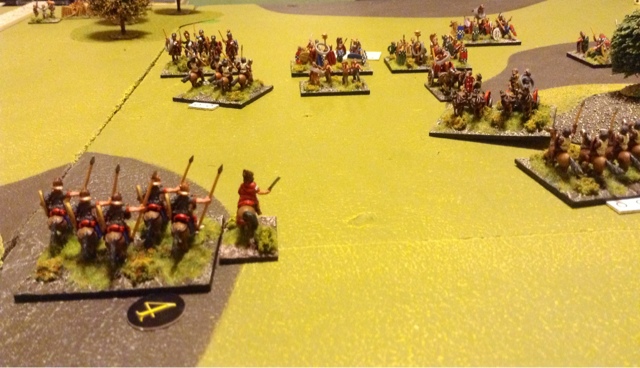 The roman right flank is destroyed when the auxiliary spearman break, with there flank now threatened by the chariots and war bands a Roman Leigion reforms into a wedge and the other Leigion chargers into a war band supported by the slingers skirmishes and Suetonius himself. 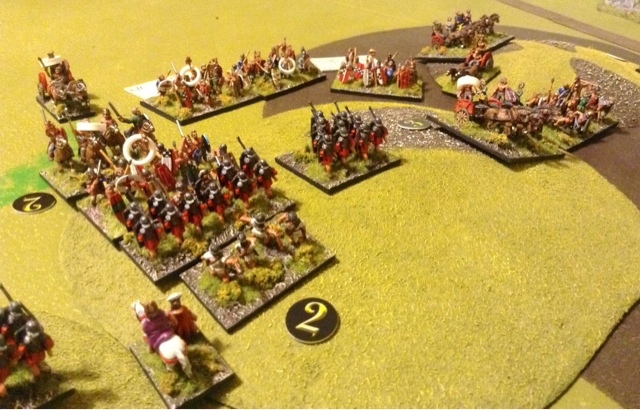 The battle line as the real fighting finally starts, the Roman Leigonaires on the right flank were right in the thick of the action and fighting a desperate fight to repel the British War Bands. 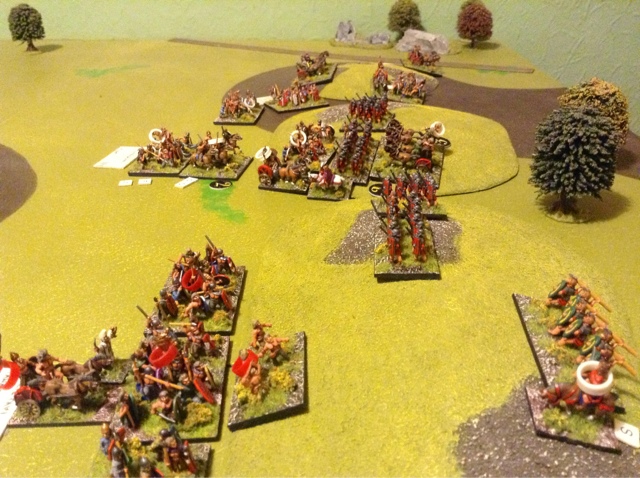 Failing to break the Warband the Leigionaires are charged in the rear by the chariots who chased away the skirmishes and a the Briton commander joined in the fight. With odds stacked against them the Romans closed shields improving their save to +3, they suffered 9 hits in the combat but managed to save every last one of them, in return they destroyed the chariots and pushed the war band back who were very close to breaking! 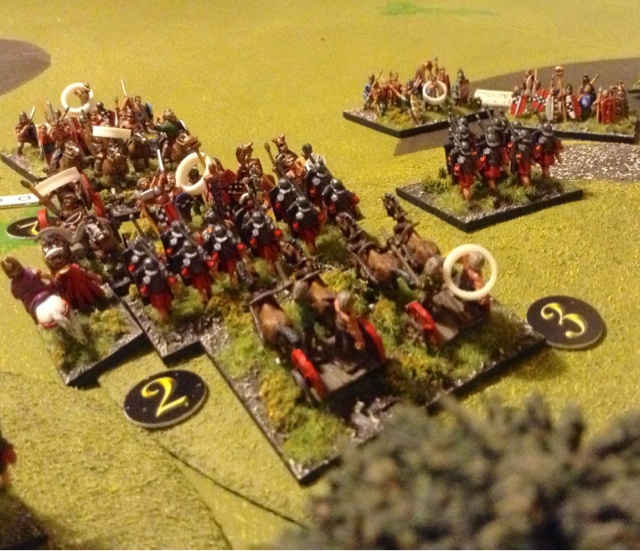 Sensing their moment to break that division of war bands the Leigionaires charged from the hill and smashed into the Britons, routing the cavalry and making the war bands become shaken.

From this picture you can see how far behind one of the divisions of Britons had become, totally out of th fight where they were needed. 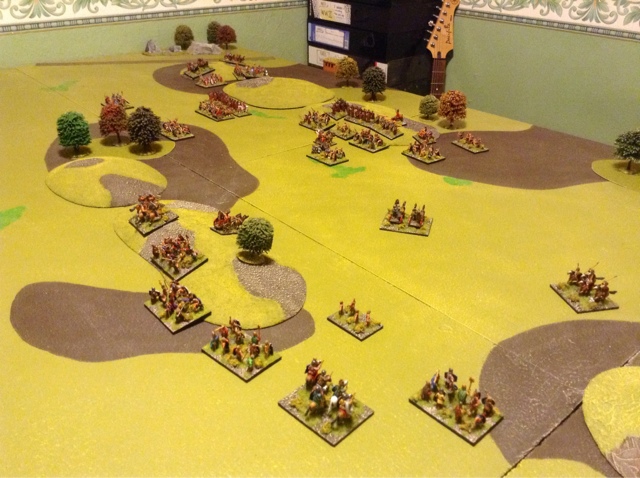 With time up the final position.

The Roman wedge is some what surprisingly repelled by the Warband suffering heavy casualties, but still the Ronan line is in a strong position, one of he war bands becomes shaken to. 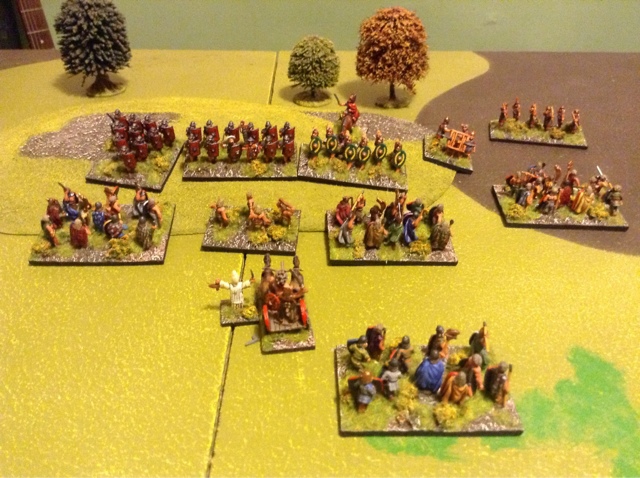 After breaking the cavalry the British Warband is broken and start to flee from the battlefield, Boudica's division turns to face the legions flanks. 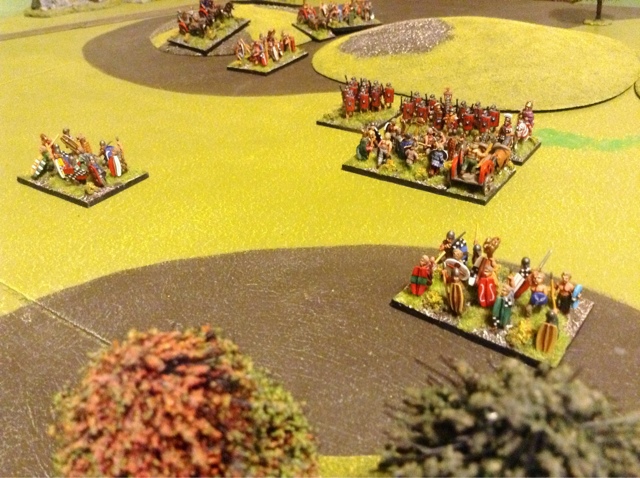 Well time was up and neither of us had managed to hit our objective. The Roman Leigions had not been broken and despite been close to losing two divisions the Britons has lost only one.
The Britons suffered to many bad  command rolls when crossing the battlefield and couldn't attack in the mass numbers they required to break the Leigionaires who themselves proved to be very tough and incredibly good with their shields. I enjoyed the game and I had started to fancy my chances of a win in the closing stages of he game but just couldn't quite get the command rolls I required to press home my attack, still facing so many Britons i was pleased with how I faired in the end....
Posted by Neil at 07:46 No comments: