A little bit of kings of war action as the undead arrive......

Our last game saw a fantasy clash and a first outing using Kings of War for my undead army. They were opposed by my dads dwarf army in a straight up pitched battle which as can be expected from this rule set was a pretty brutal affair with lots and lots of destroyed units. Neither side could quite get the victory in the time we had but it was a mighty close game and a draw was a fair reflection of the action. The undead faired pretty strongly, they are slow to get into the action which they are in other rule sets , which can be frustrating but once they reach the enemy they can be very durable in melee and have some good units which can be very hard hitting. The game was was a nice change from the norm and next time we are going to try one of the scenarios in the kings of war book to add a tactical element to the game. Here are some photos of the action....
The set up 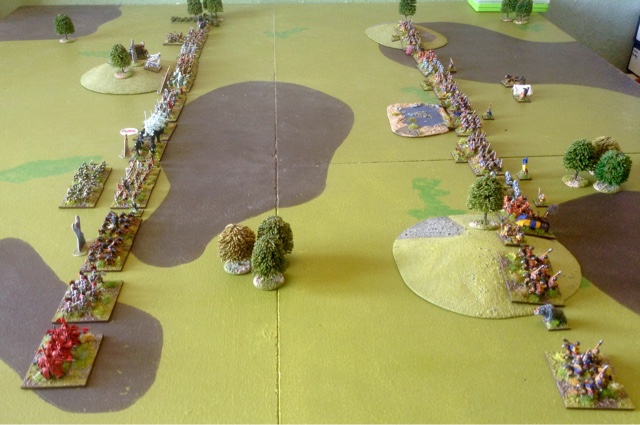 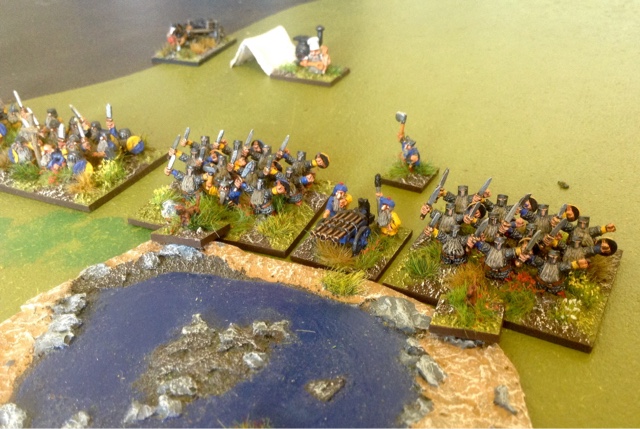 Troll slayers await their doom along side the rock elements 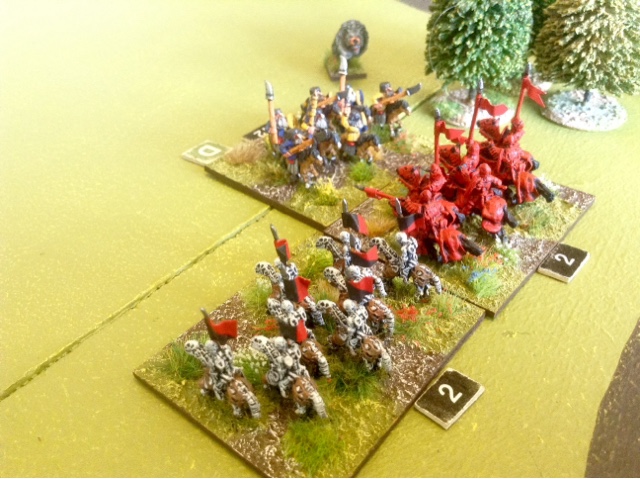 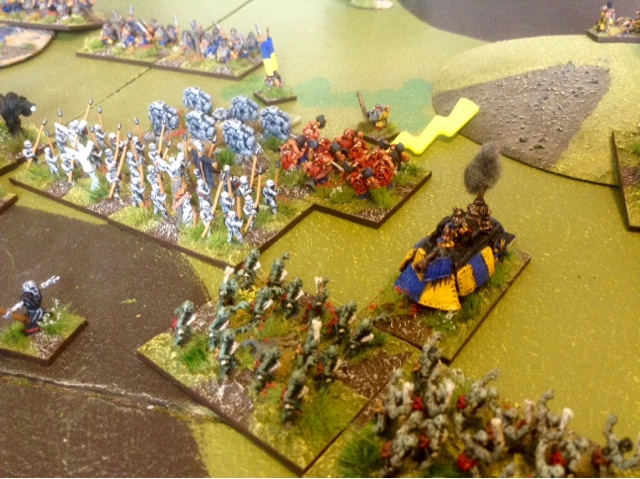 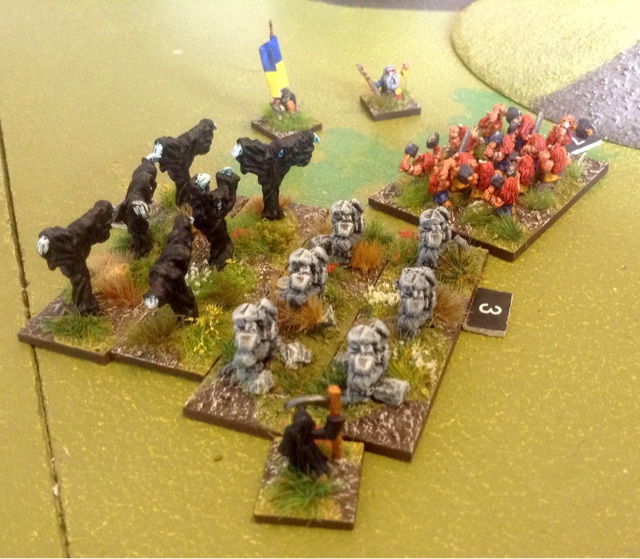 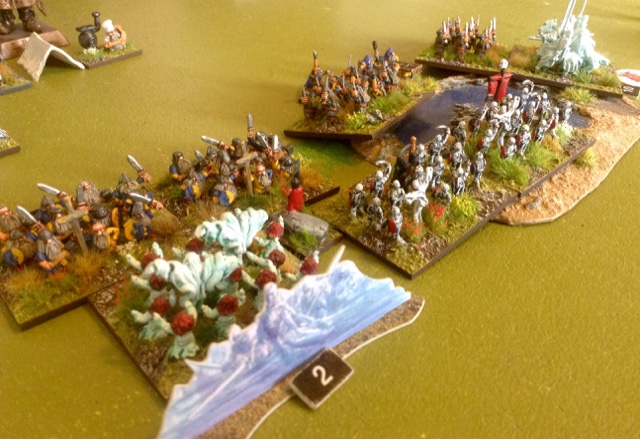 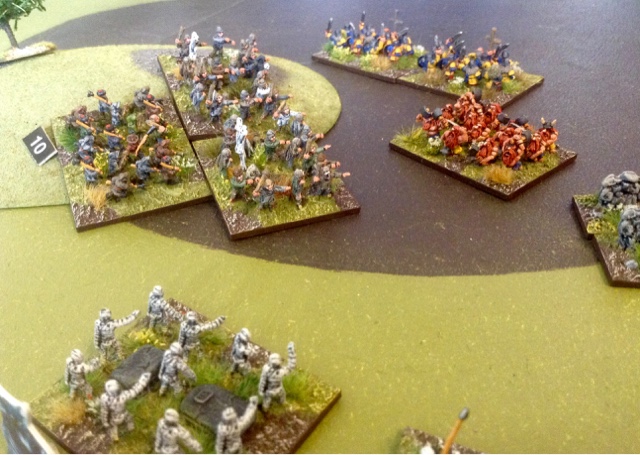 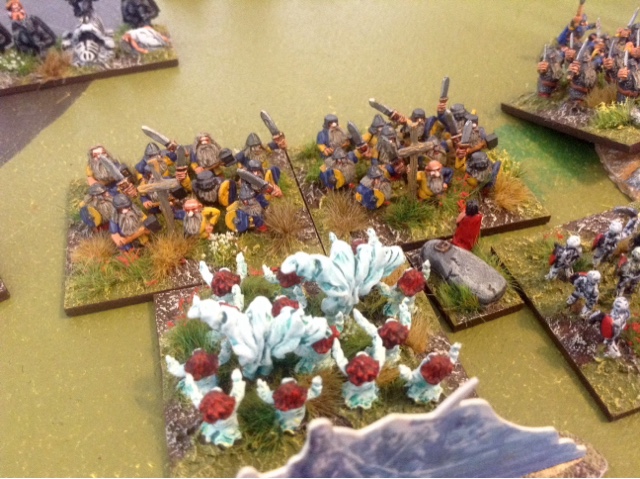 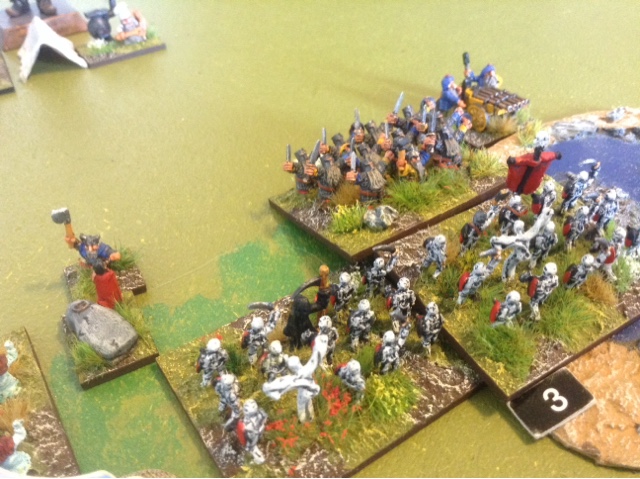 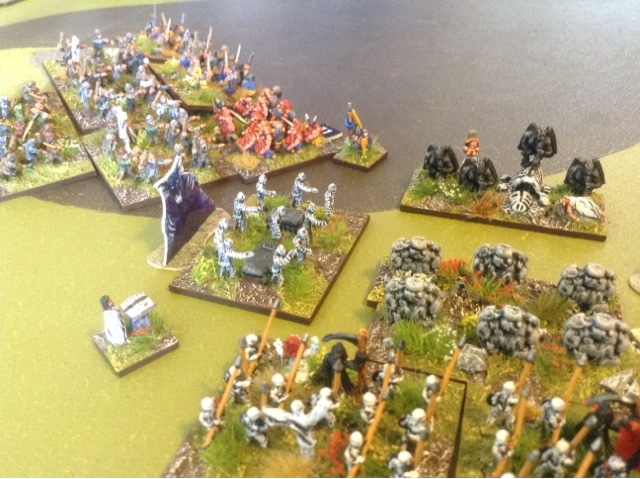 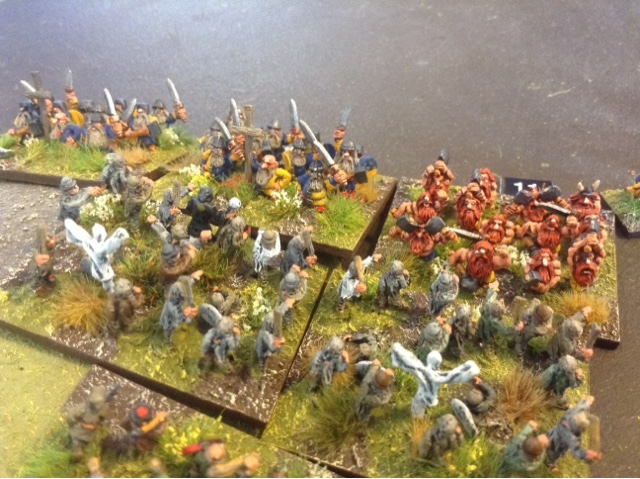 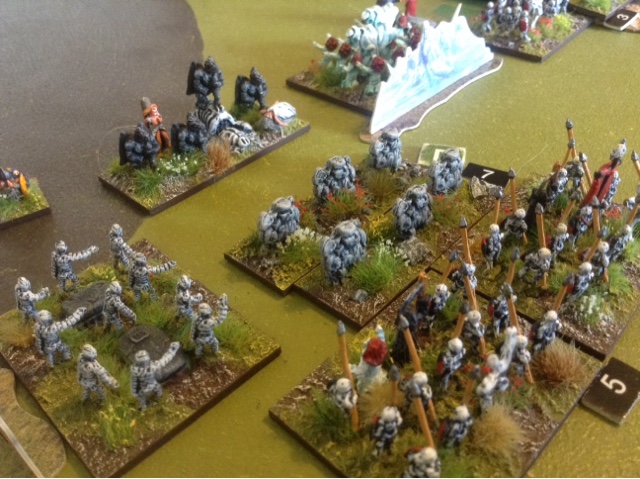 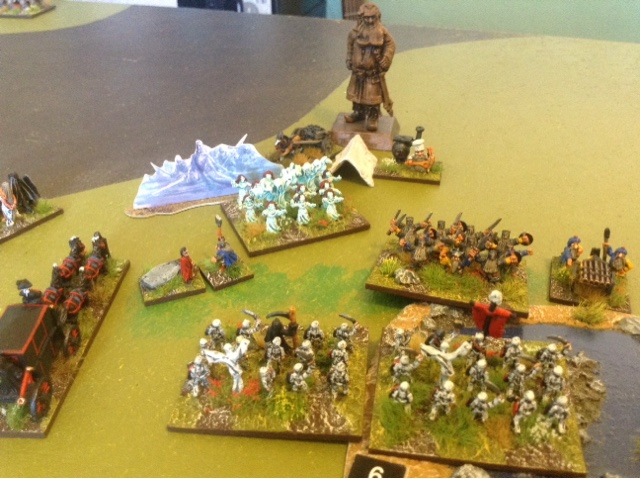 The end of the game, with a lot less troops on than when we started 😄 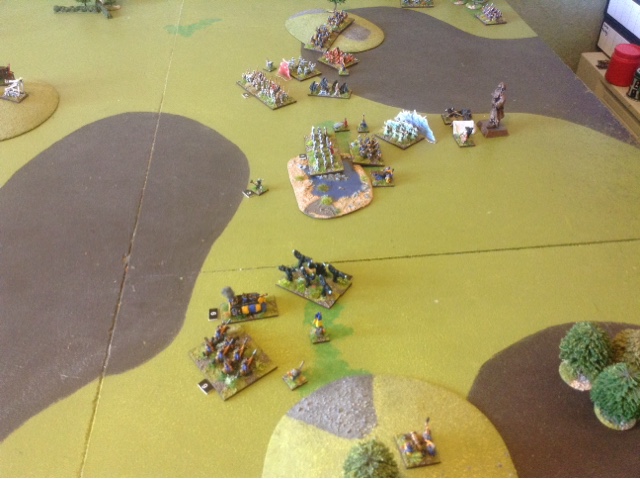 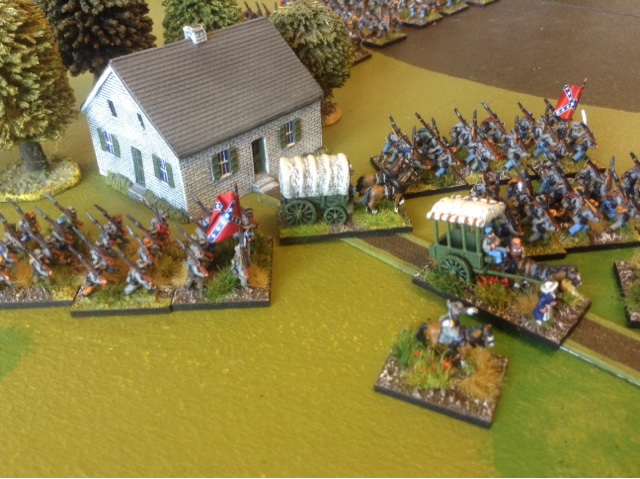 Time has been sparse at the moment due to a multitude of things so I have fallen behind in keeping my blog updated, so before I watch the last episode of the walking dead I have made myself a cuppa and with Robert plant live playing away on the sky box I am going to write up a quick report of the ACW game my dad and I played a couple of weeks ago. As the post title says we fought the battle at Salems church 1863 taken from the Blackpowder supplement Glory Hallelujah and of course using Blackpowder rules. We used the troops my dad has available so for the eagle eyed amongst my readers the Irish and Texans weren't present at the battle on the day but to make up numbers they would be this time, but obviously they were to be treated as regular infantry. Always one to be a sucker for punishment I decided to use the Confederates, with my first division been exhausted and only able to make one move a turn and been outnumbered by the union this would prove to be a tough ask. The game lasts for seven turns with the winner been the side who can inflict the casualties onto the other side 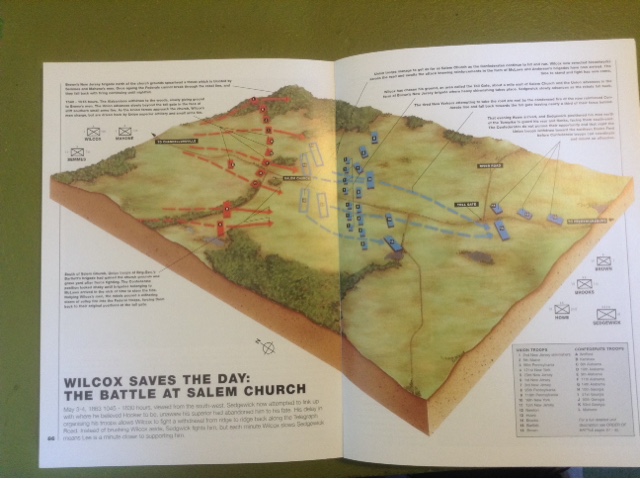 How the armies looked on deployment, another division was to enter play on the unions first turn central behind the union centre. The wooded area on either flank would only allow a single move at half speed per turn, I put one of my exhausted brigades in the woods on my left flank hoping that I maybe able to outflank the union line. 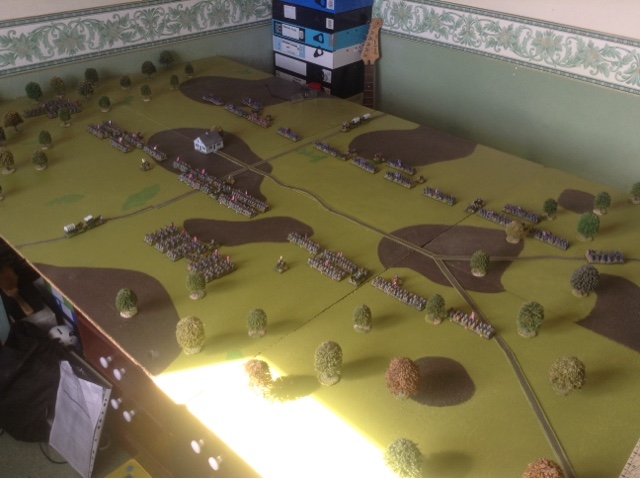 My out flanking plan didn't quite materialise as a result of failed command rolls, a blunder and the half speed movement, they did become involved late in the game but 2 regiments from the brigade failed to get into the action, in hindsight I had wasted these troops. 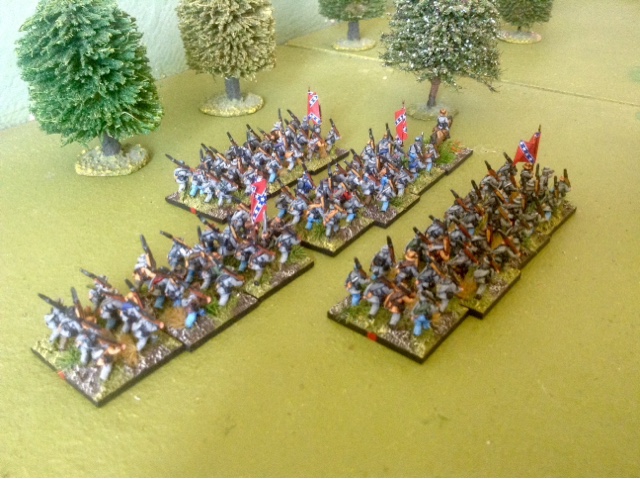 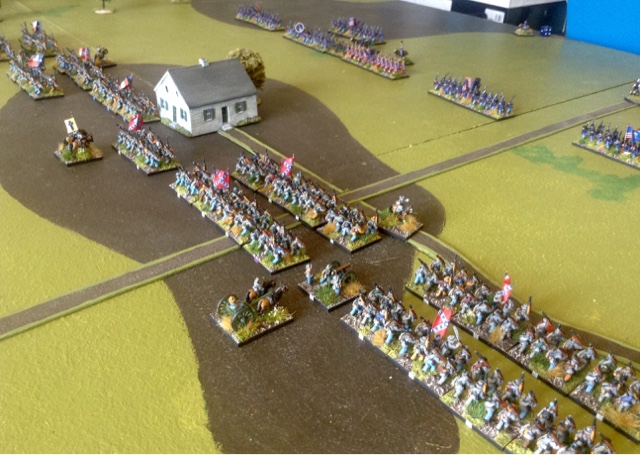 My reserve brigade from the second division, the plans were to wait till the fire fight had begun with the front line troops and reenforcements the line were needed, however as the next photo will demonstrate they were quickly needed else where on only move two of the game. 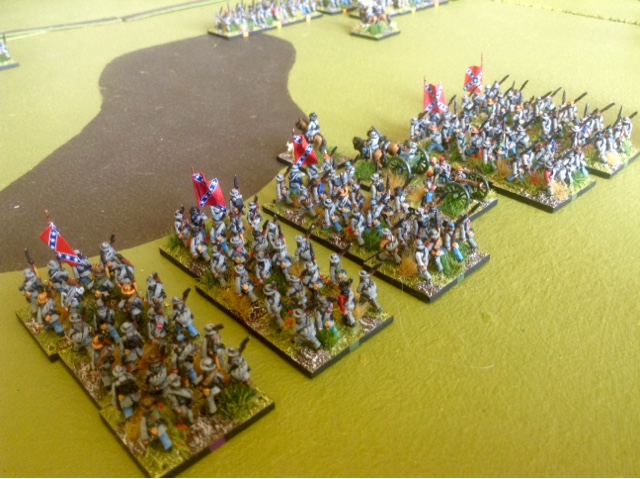 Yep a BLUNDER! The divisional commander cocked up big style and sent a full four regiments back two moves away from the front line leaving a colossal hole in my battleline, with my dads eyes lighting up at the prospect of the mayhem he could cause due to this action I had little choice but to commit my reserves to plug the gap, so much for plan A! 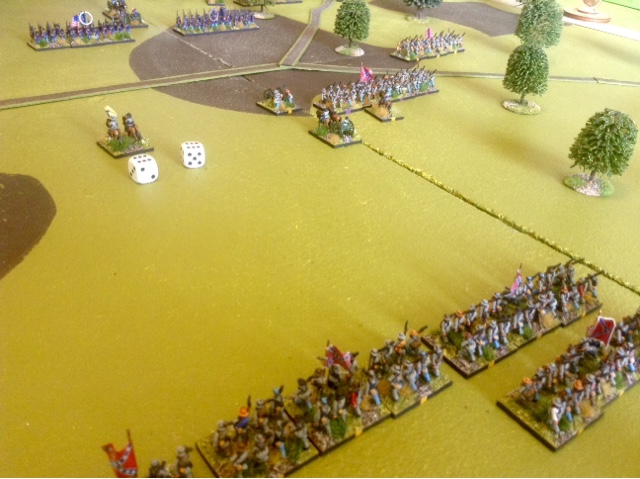 The fire fight rages across the battlefield

By the half way point it was clear that neither my dad or or I were going to be able to push home any advantage we thought we might have as both our front line troops were pretty shot up, this battle was turning into a battle of nutrition and who had the bigger balls to stand the longest under the heavy fire we were both receiving 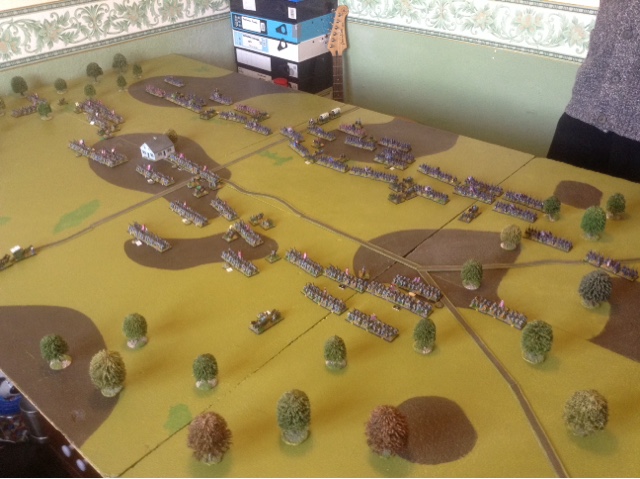 My first brigade of the 2nd division returns back to the front line to lend its support in the fire fight. I was unable or should I say reluctant to advance past this point as my dad had brought up the union artilley to cover his now retreating front line,  My rebs had already been shot up in the previous fire fight with the retiring union infantry brigade so to say the sight of them double gunned batteries was off putting has to be something of a under statement  😄 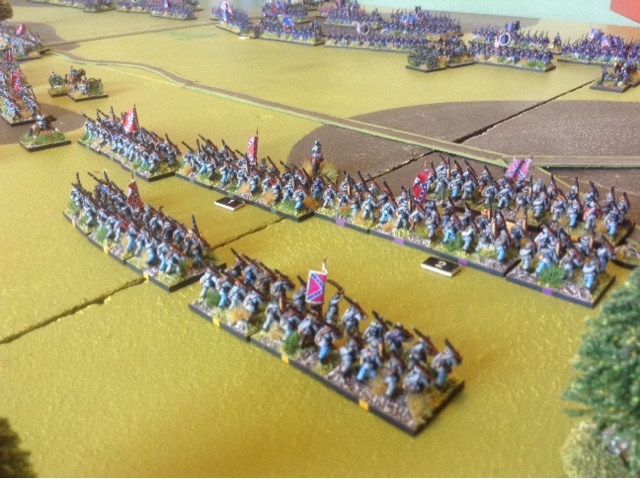 The fighting round the church briefly swung in my favour as the front line union brigade was broken, but unfortunately for me before I could press home my advantage my dads whipped troops remained were they were with a number of sucessful morale rolls and in turn broke my leading rebel brigade, this pretty much rendered this side of the battle a stalemate.

A second union brigade is broken but there was another full strength brigade ready to deploy in its place, however with only one turn remaining as was now 2-1 up on broken brigades, victory was in sight................ 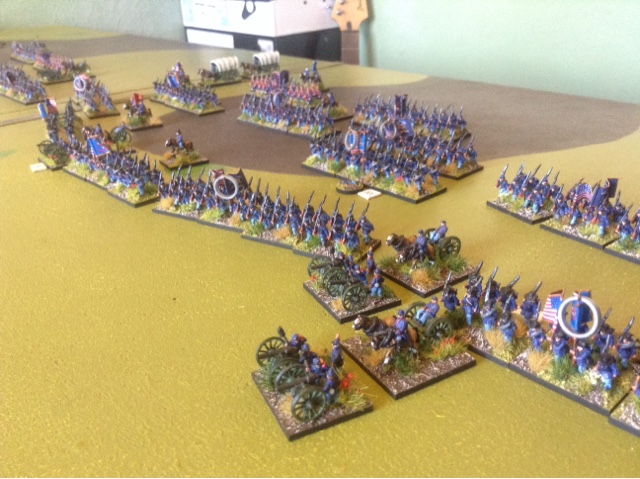 ........But alas not to be as a second brigade broke under some withering fire from the boys in blue and by the end of turn seven both our armies had suffered the same number of broken brigades declaring it a draw. 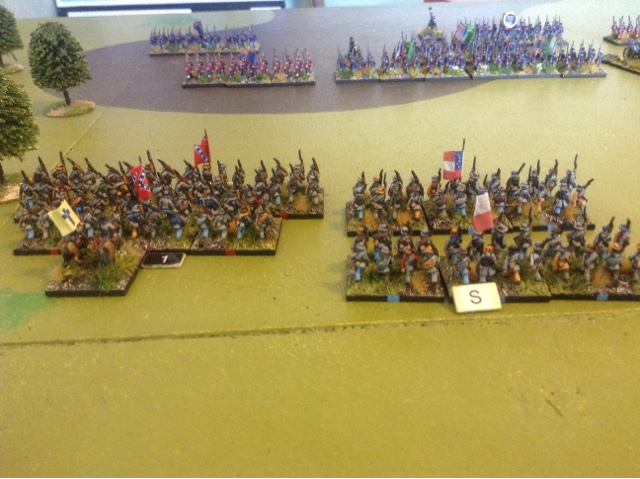 This game turned out to be a desperate fire fight meaning it was a tough call for either side to claim a victory but more so I feel for the rebels, the way the battlefield is with the woods on either side led to our troops getting bottle necked into fighting through the centre as it would done in the real battle on that day back in 1863. It was still another cracking game from a period which is taking to me more and more each time I play it and definetly using the Glory hallelujah supplement helps to give a solid period fell to the game IMHO.
Posted by Neil at 13:26 10 comments: