Seen as though I had a lieu day from work me and my dad ran an afternoon Battle Group Kursk game. I fancied trying one of the historical scenarios from the book and we decided to do the West of the Oktiabrski State Farm. We rolled for sides I was given the job of leading the Russian assault.
The game turned out to be a very close run affair though at one stage I felt I had the game won quite
comfortably but I was mistaken, here is the game....
Russian tanks with riders enter the table heading towards the dug in German SS Grenadiers. 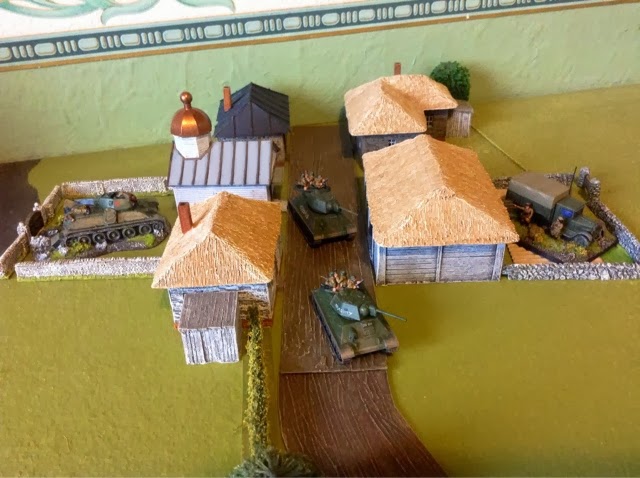 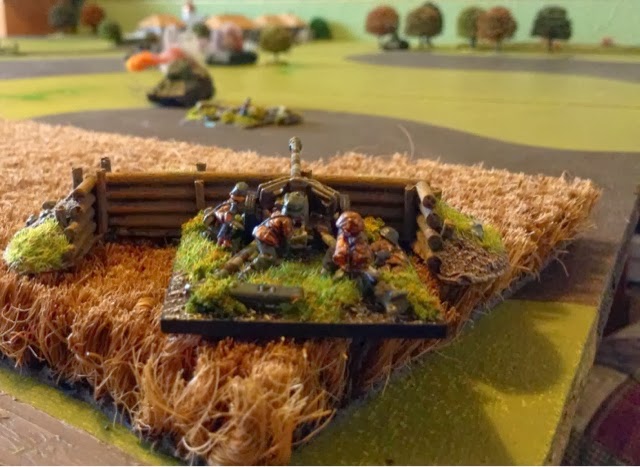 After rushing the German defences Stal Stal Stal style I totally forgot I had a timed Kytusha rocket bombardment hitting the area around the objective at the crossroads, the Germans loose a couple of infantry squads with direct hits and a T34 explodes onto flames as a result! 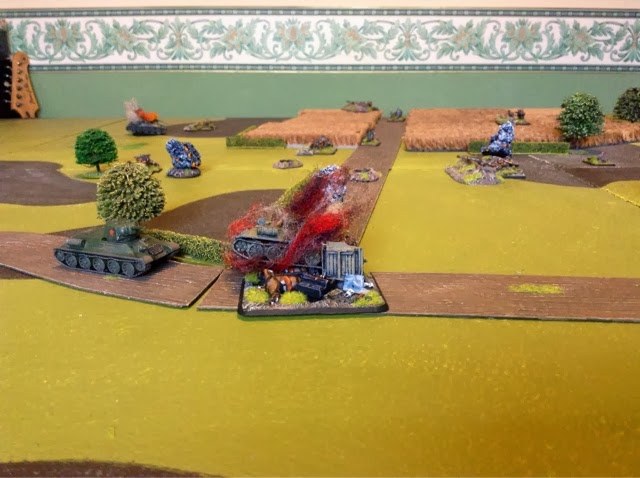 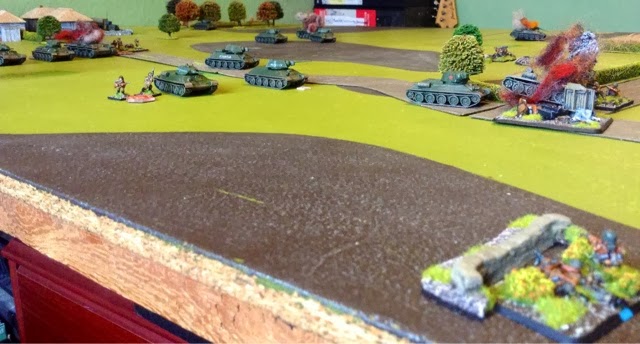 The Germans weren't getting it all their own way and a long range T34 AP round destroys a Pak 40. 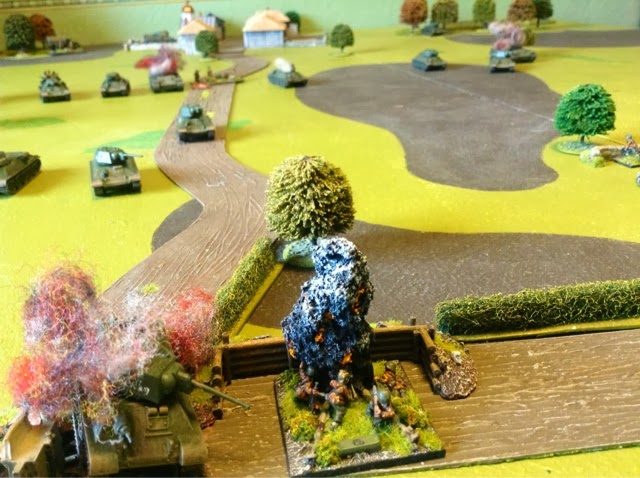 A JU 87 dive bomber drops its bombs on the advancing T34's, with tank riders scattering from the tanks the large bomb hits direct on top of one of the Russian tanks.....,BOOM 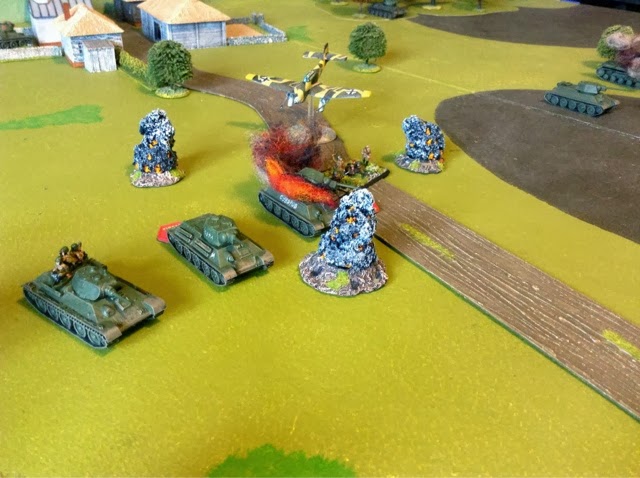 With a second Pak 40 destroyed the Russian tanks claim the cross roads objective. 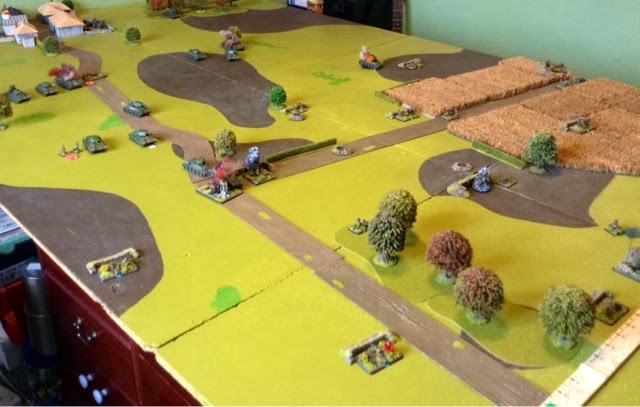 German armour starts to arrive in the form of a Stug III platoon, also off table 88 shots are now in range of the Russian tanks which slam home into the targets. 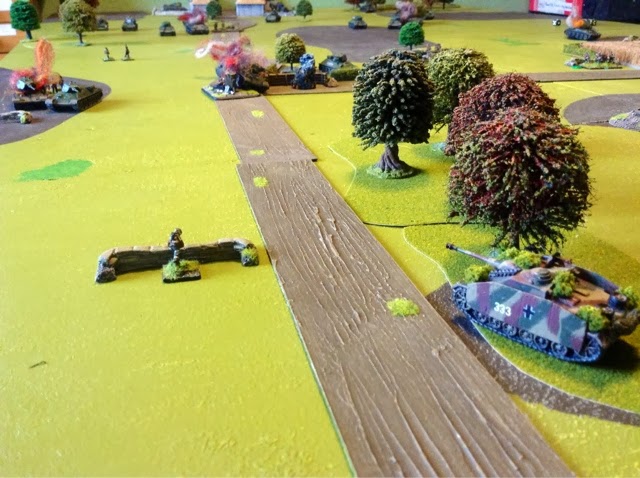 The Russian HQ tank goes up in flames after a 88 mm shell easily penetrates its armour. 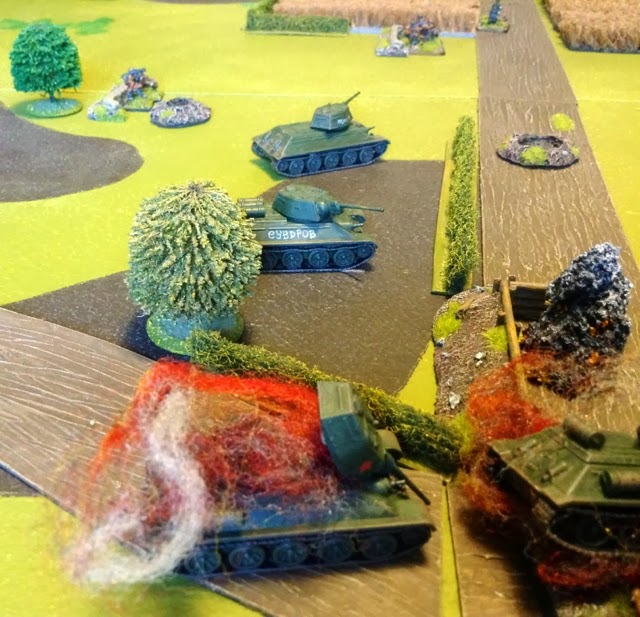 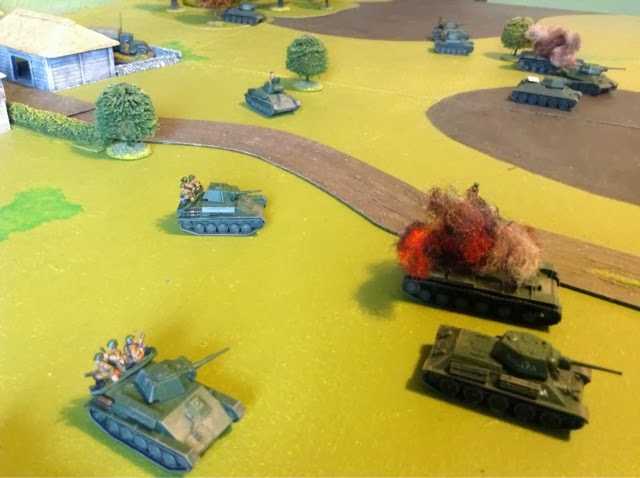 The first line of German defences is over run and their moral chits are starting to mount. With so much armour over running he German defences I felt confident I would win from this position. 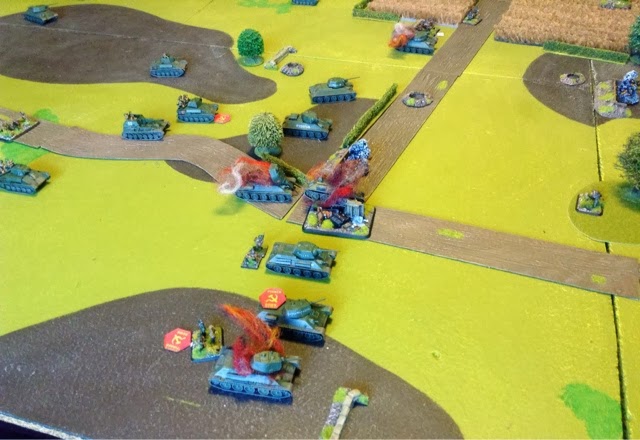 Another Stug platoon enters play as he final German reserves start to change the course of he game. A back and forward fire fight sees the Stug forced to take a morale check which is passed with a beyond the call of duty action. The Stug opens fire destroying the T34 with these bonus shots. 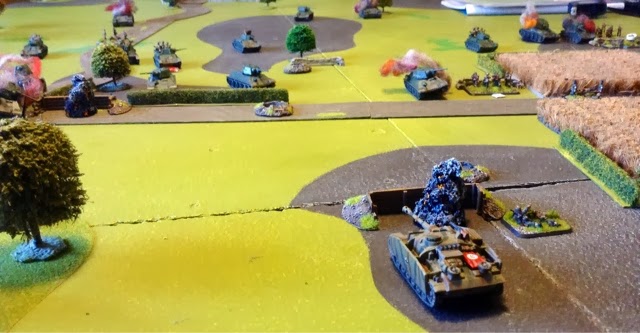 The final 88 shots coupled with the Stug KO another two T34's, all of a sudden with sum high morale chits I nervously approach my break point. 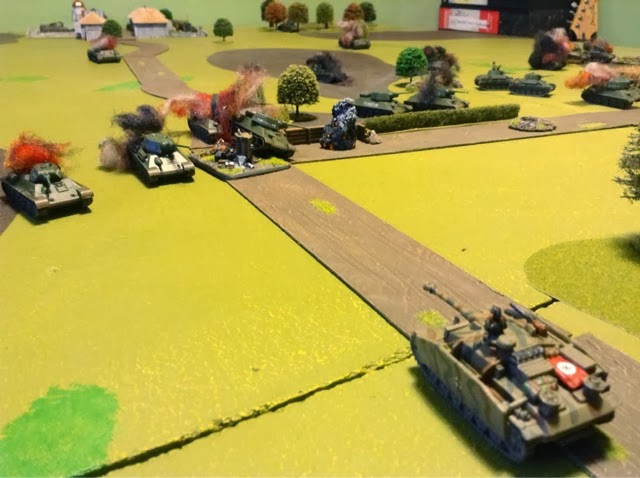 A surviving T34 gets some revenge and KO's the Stug III. The resulting chit pushes the Germans very near their breaking point, my Dad was now unable to risk trying to rally any pinned troops so I new he must be about to break. 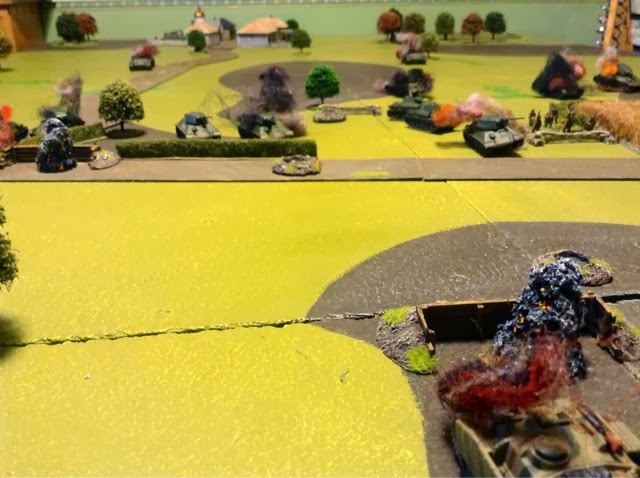 The Stug advances with its pinitle machine gun firing and destroying  a unit of infantry. My break point was 61 and I was currently on 59, the resulting chit was a 1 (big sigh of relief) I would have one more chance to win the game. 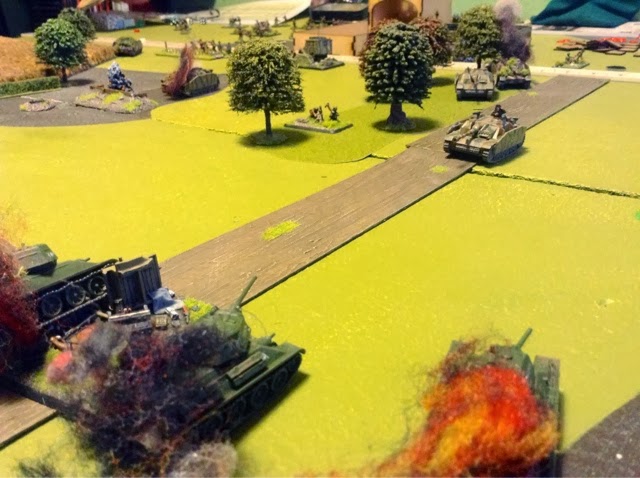 A Russian infantry platoon enters the German fox holes and opens fire on the dug in HMG, the volume of fire is enough to kill the MG 38 team pushing the German's past their break point finishing the game. 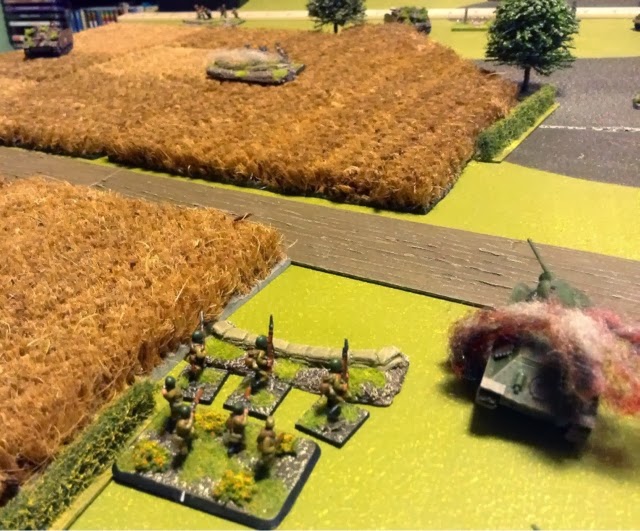 The final battle field, Russian tanks are ablaze all over the battlefield, I may have won the battle but at a very heavy cost, out of a starting force of 13 T34s, 6 T70s and two infantry platoons I had 2 T34s and T70s left and one squad of riflemen and a command stand left. 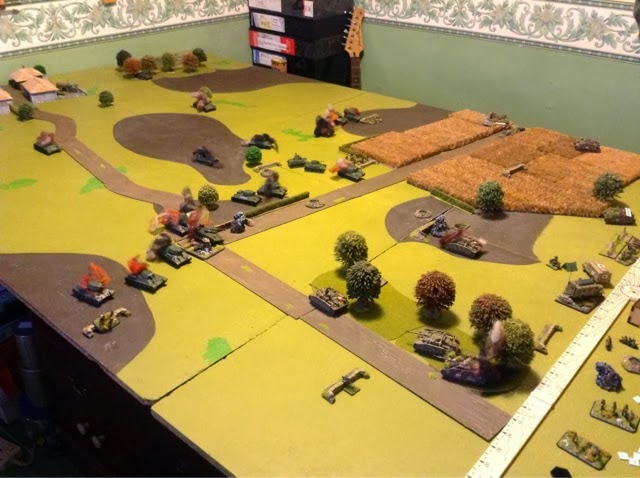 I really enjoyed playing the scenario and through some serious luck in pulling low morale chits for the majority of the game and getting 6 special morale chits I managed a win for the Russians. On any other day I could have passed my break point a few turns earlier. However it came down to the humble Russian file squad to win the game and not he massed ranks of Russian tanks when it finally killed the MG 38 HMG which had caused a lot of damage to the Russian infantry through out the game. The Germans put up a brave fight and very nearly won the game before deciding to abandon their positions  and fight another day, as for the Russians they will continue their advance once they get some much needed reinforcements...........
Posted by Neil at 13:11 4 comments:

After playing a few games under the rule set Hail Caesar and really enjoying them I have decided to collect myself an army to use. With plenty to choose from I finally opted to do Alexander's Macedonian army or with the addition of a few elephants, his successor army. I have made a few purchases to get me under way and as ever I am lucky enough to have a Dad who very kindly paints the troops for me  :-) , I am very happy with the results so far, here is a couple of pictures of how they are progressing, 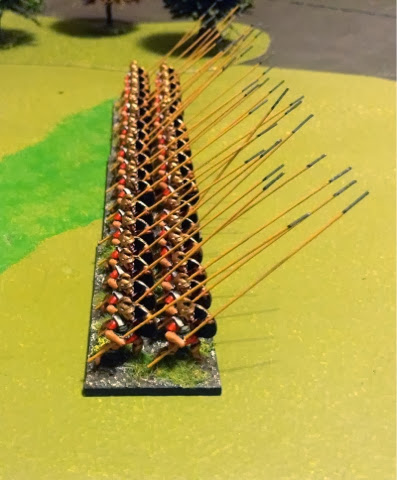 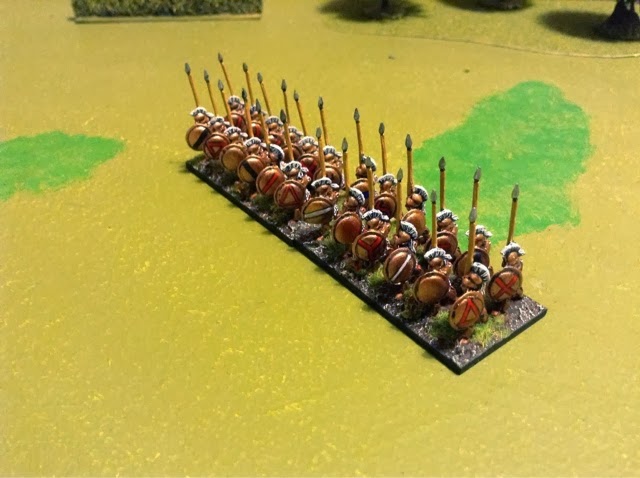 And some mounted troops, Companion, Thessalian medium  and Thracian light cavalry, all by irregular miniatures. 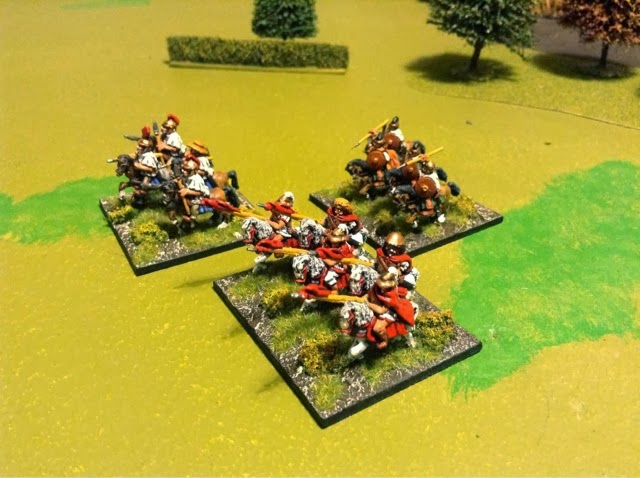 I will be making more purchases  hopefully this  weekend at smoggie con from Irregular miniatures and I'm also looking forward to see the models from the forth coming Forged in battle ancient range, from the pre view pictures i have seen on there web site they look fantastic and if there WW2 range is anything to go by I'm not going to be disappointed.
Posted by Neil at 12:00 1 comment: