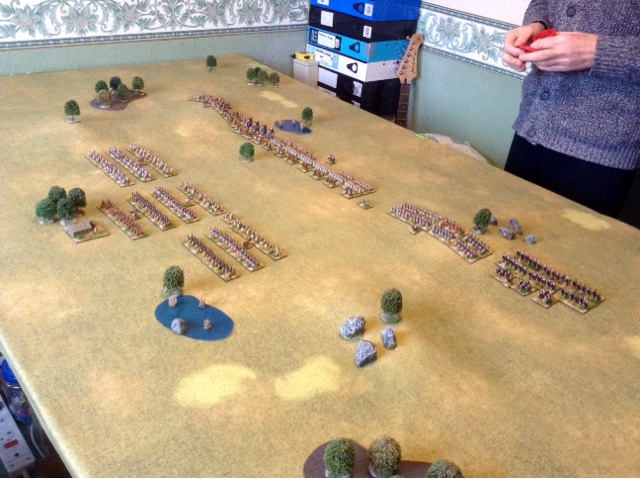 Our last game we played saw me try my hand at commanding the Republican Roman army against the might of Hannibals Carthaginians using our rule choice of Hail Caesar. I had my troops in three divisions with my cavalry as a single division which was hidden behind the hills on the flank. My dad using the Carthaginians had three divisions of infantry with war elephants and a division of cavalry. 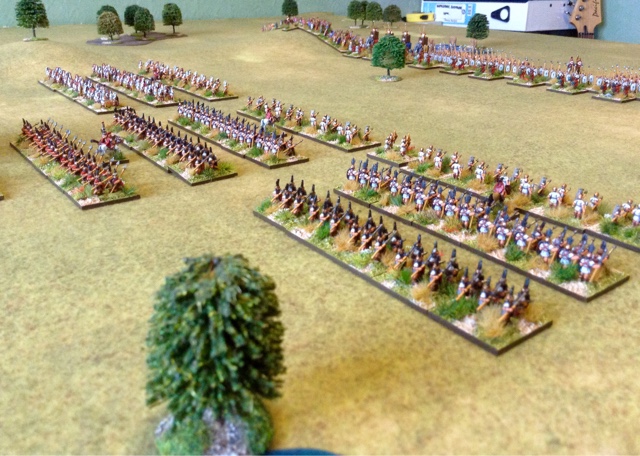 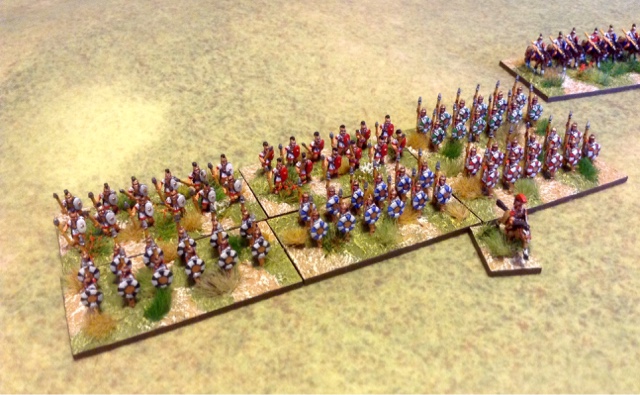 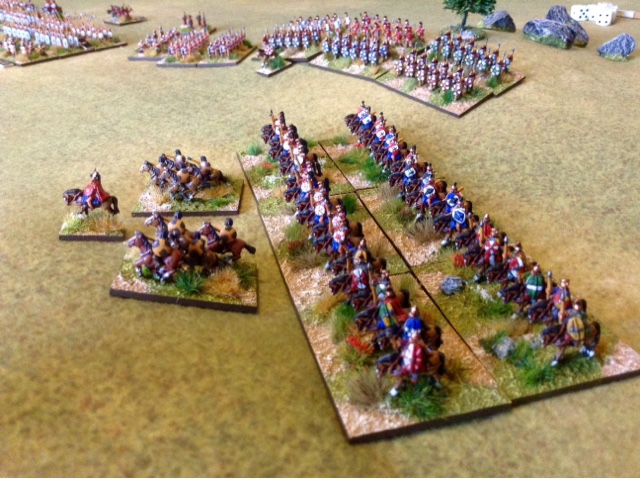 Using the Republican Roman army proved to be a real challenge as the army is predominantly small units, something which I have had little experience of using. I didn't really use my Velite troops to well or in the correct way to be honest but this was more down to miss understanding the correct use of role they played in battles and I over looked the fact that they counted towards your break point, as a result of this I used them way to rashly. However if you can coordinate your attack in close combat, getting a couple of these small units especially the tough fighting Hastati who are dispensable not counting towards your break point, in against the Lybian Spearmen proved to be a serious handful for the Carthaginians to handle, although abit of 'rule rust' saw us over look a few rules such as no combat bonus for charging in against long spears to the front.
Not where your Velites need to find themselves! 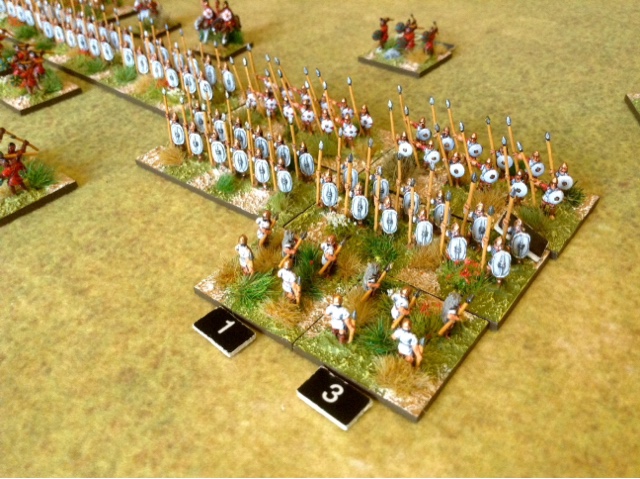 My Dad announces a charge against the flank of my Hastari, no chance I reply your going to need to roll a double one... Typically my dad rolls a double one...Charge!!! 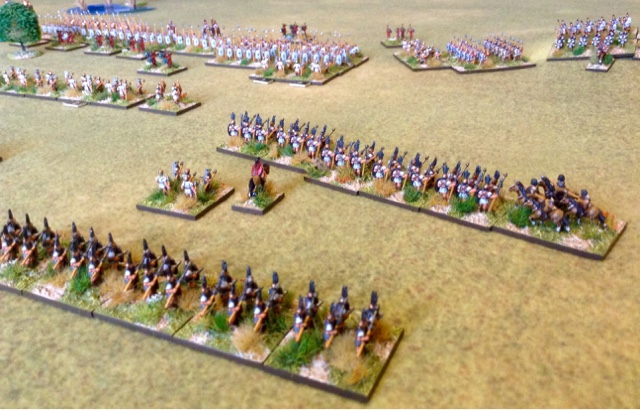 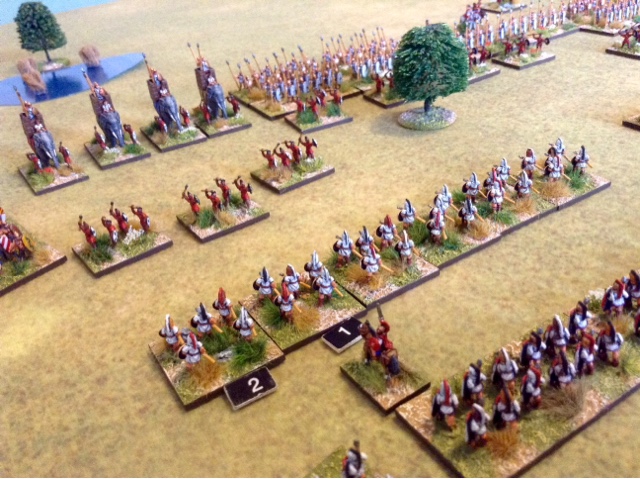 Routing the Carthaginians skirmishes seemed like a good idea for the Spanish Caetrati, well for a brief moment anyhow.... 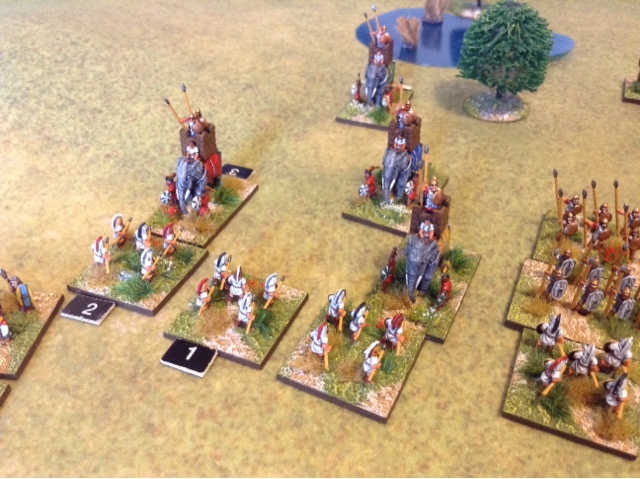 The Gauls took their time getting involved in the fighting, deciding to to just stand and watch for most of the game to see how the Carthaginians faired, but when they did decide to join in the fight they did so ferociously as the poor old Spainsh Scutarii were to find out first hand. 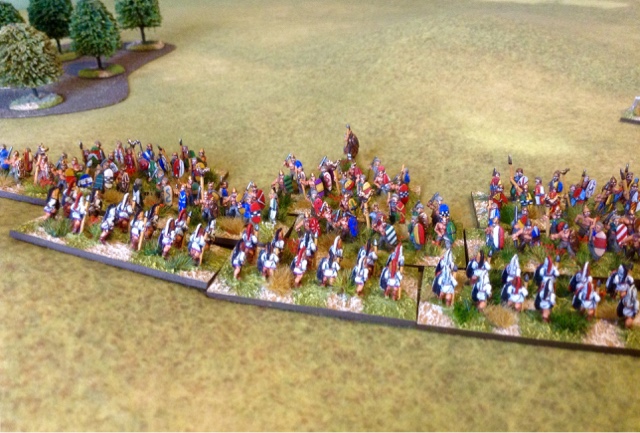 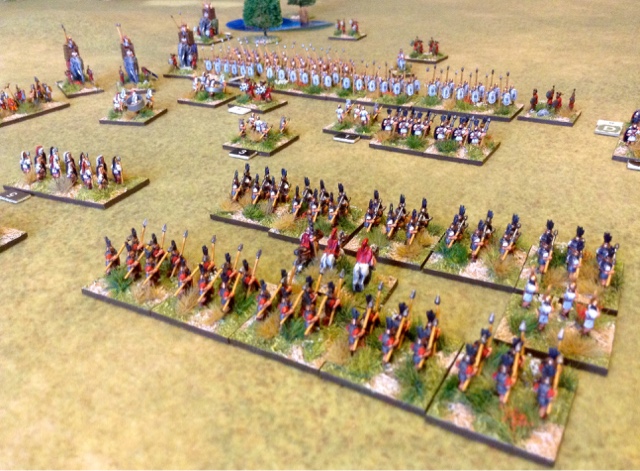 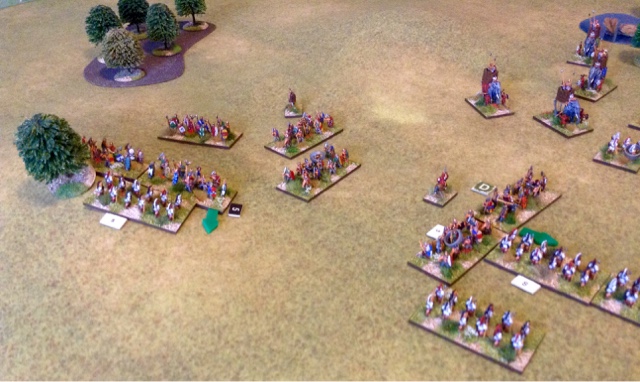 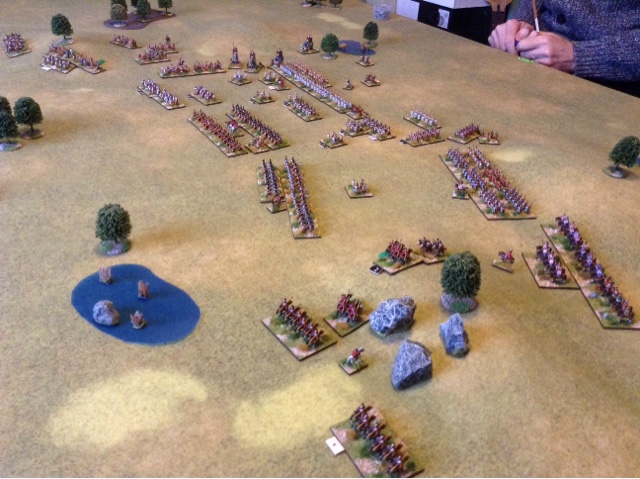 I just about hung on for a draw, my left flank had been smashed by the Gauls with the Spainsh allies of the Romans had been broken, however a heroic last stand by a unit of Scutarii stopped the Gauls turning the Roman flank when their was still enough time in the game to have a major impact on the outcome. My cavalry faired reasonably well when they decided to move after failing every command throw for the entire game and were on the verge of breaking the Carthaginian cavalry. In the centre both our armies were still in a strong fighting condition to continue. Plenty of food for thought to take from this game and how to handle the Romans tactically, great game again though!
Posted by Neil at 03:28 5 comments: 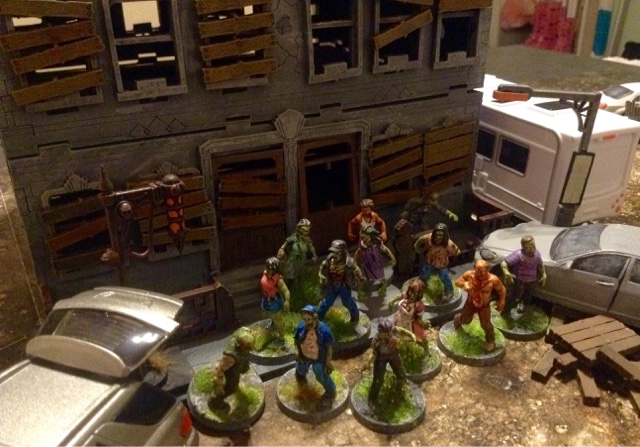 Last year in November I purchased the walking dead starter set while at the battleground wargames show and since then I have been busy painting the models and adding some scenery to the game. The game itself is excellent and really good fun, the few games I have ran have all played different although I was using the same characters and scenario, things can get pretty hairy quickly, non more so than my latest game last week when early in the game a turn of a card signalled Pandemonium which escalated the walkers and the threat level alarmingly, if that wasn't enough the following event card signalled the same thing turning the game on its head!
Rick Grimmes and his son Carl out foraging for supplies. Notice the billboard on the side of the bus stand 😉 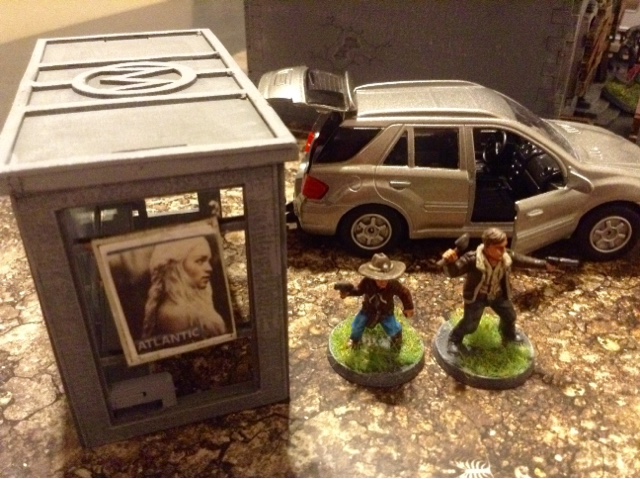 Derek (centre) and his side kicks Sandra and Patrick outside the local take away shop. The buildings are all from TT scenics and are really good value for money and are ideal for the purpose of this kind of game 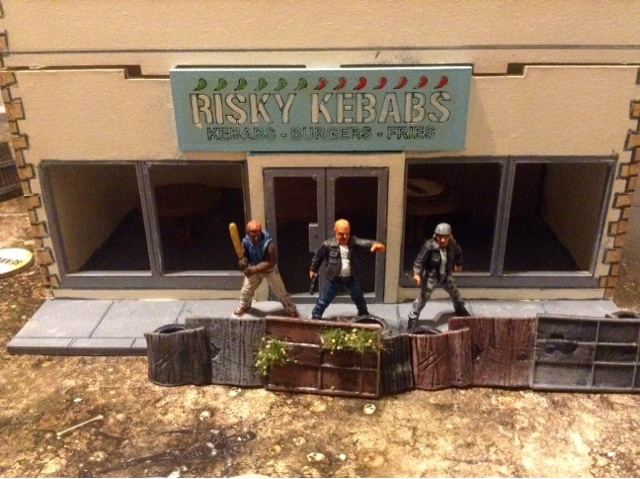 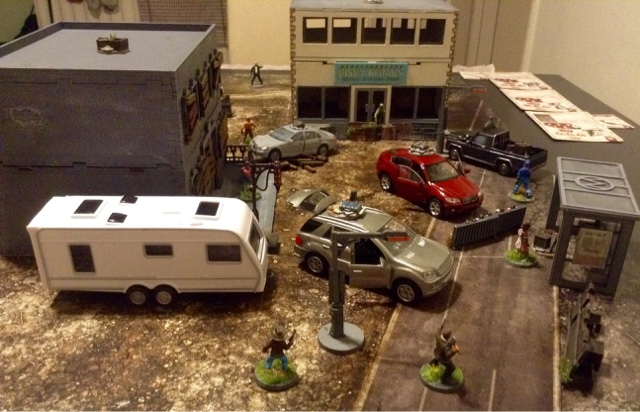 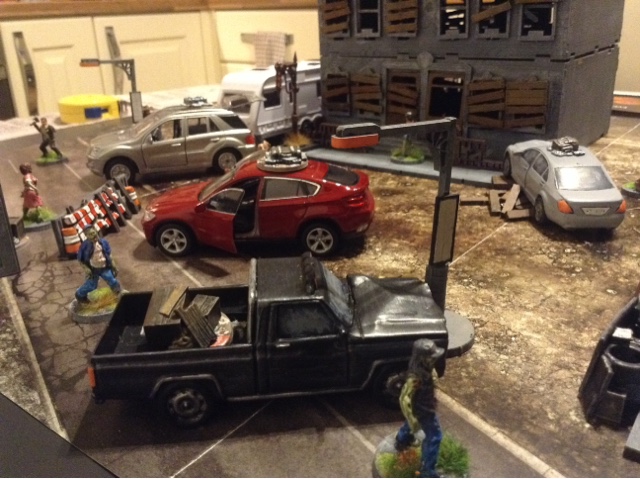 A bus stop I purchased, once again from TT scenics 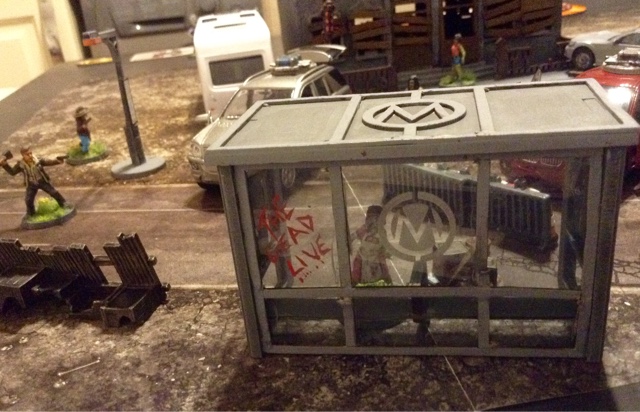 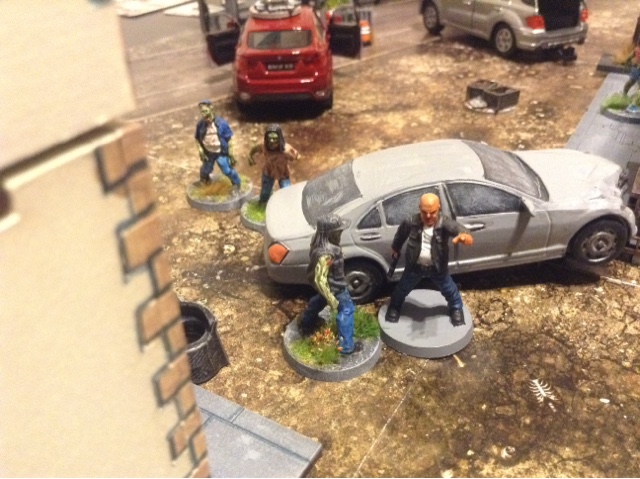 A walker attacks Rick but on their own walkers are not usually to much of a problem to deal with. 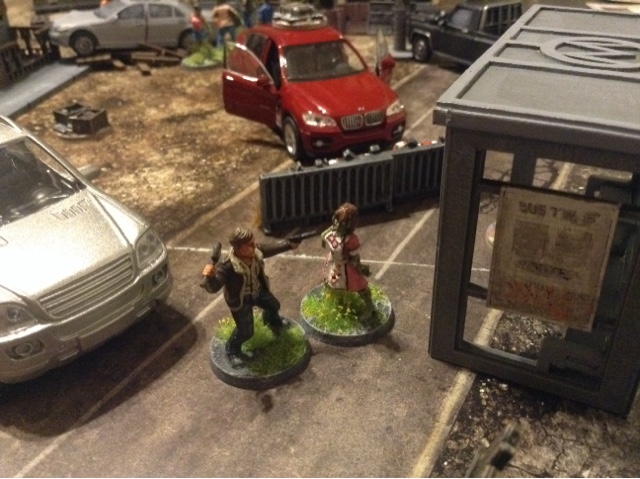 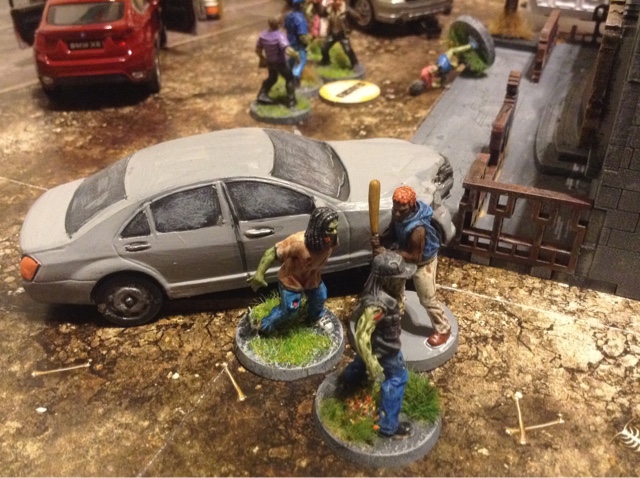 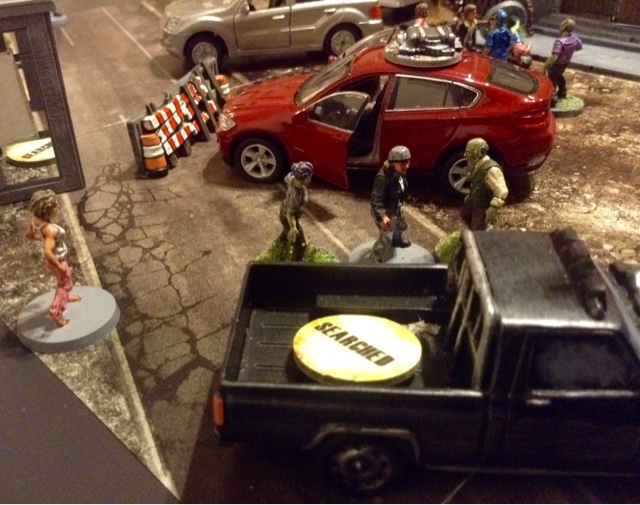 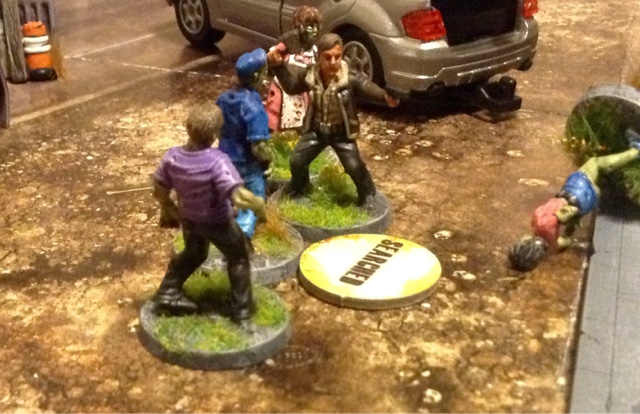 Patrick is overwhelmed and finds himself returning as a walker 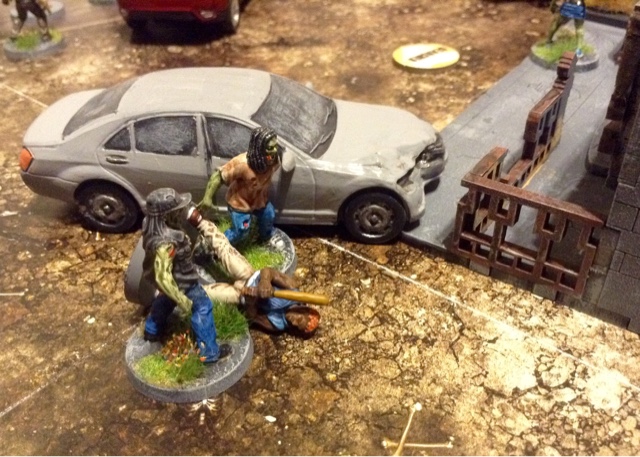 Sandra used her ability to escape from combat and made a dash for the supply box only to attract the attention of a walker who managed to bite Sandra, this bite caused another wound at the end of the turn, turning Sandra into one of the living dead. 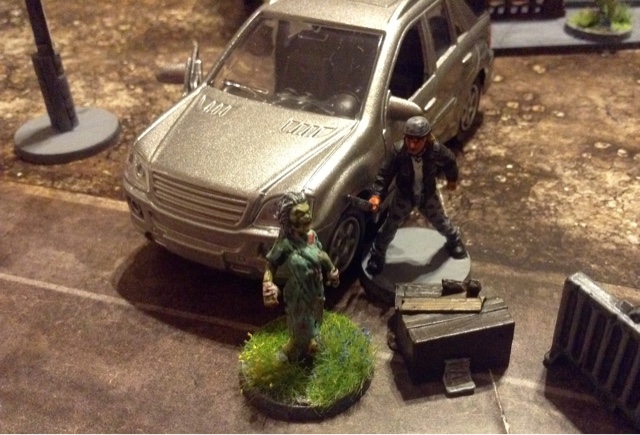 By this stage of the game Carl was now testing for his nerve which he kept failing with dramatic effect, he fled into the abandoned building followed by a bunch of walkers, however Rick was just about hanging on in there and after shrugging off the effects of the bite for another turn he was able to move and protect Carl from the attacking walkers. This final move saw the threat level reach maximum ending the game, with Rick and Carl victorious this time as the had scavenged the most supply items, Derek was going home empty handed and without his gang members already plotting his revenge. 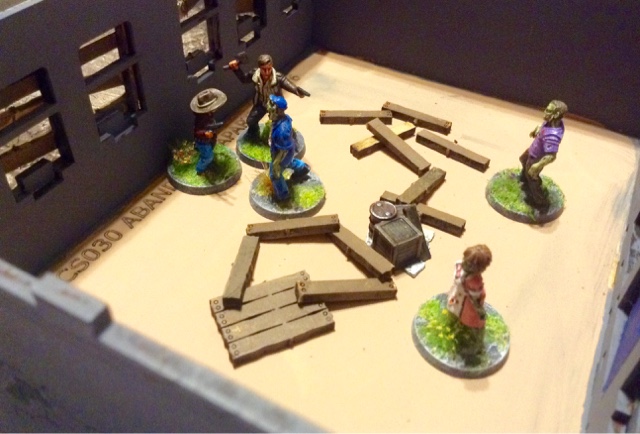 I have since added the Days gone bye Atlanta expansion set while at York VAPNARTAK
Wargames Show on Sunday gone which sees the inclusion of a few more characters from the Comic (and tv series) to the game which are already on the painting desk and while I was there I bought a box of the warlord games Zombies as the referenced excellent value for money compared to the mantic zombie booster set which contained the models I already have. I saw the Warlord zombies been used in a excellent participation game of the Walking dead while at the York show, I have copied a picture of the game as I was unsure who it was who displayed the game so if any of my readers attended the show or know which club put the game on could you please let me know as I have a couple of questions about the scenery they used (especially the road system) I didn't get round to asking them on the day. Also at the show I picked up my pre order for my next historical project in the form of 10mm Vikings and Saxons from magister Militum, along with some 10mm Fantsy figures and also from Kalistra some undead cavalry and a unit of knights which I will be using for my blood knights for my Vampires. I also picked up my customary X wing miniture in the form of  the Sabrine tie fighter, I picked up a couple of second hand items for my terminator game, the models were from the Gamesworkshop 40k range, a imperial mortar team which will be ideal for my resistance troops and a necron flying machine which I will use as a terminator flying drone and I also picked up a Humvee vehicle to use for the resistance fighters from Urban Combat. I purchased some 28mm trees for use in the walking dead games and I picked up a new paint brush and a gaming mag, unbelievably I returned home with money in my wallet despite having a really good spend. I thought the show as great, my time there flew by, if I had hung around a little longer I'm sure I would have spent the rest of my money without to many problems 😄
Monday see's the return of the walking dead on Sky fox for the second half of the current series so no doubt I will be influenced into having some more Zombie gamimg fun!
The participation game at York Wargames show, but which club put it on?? 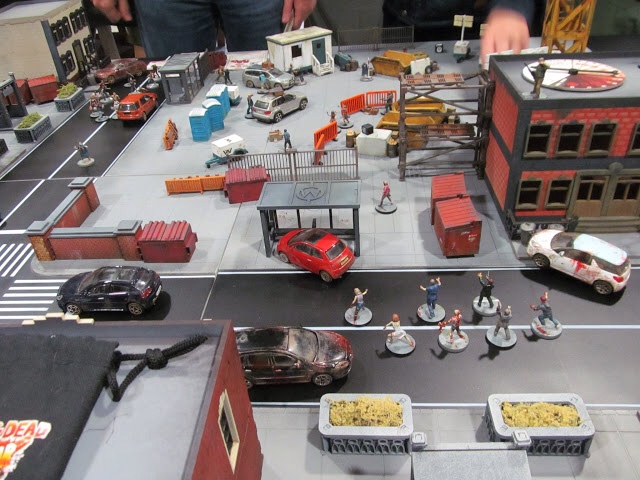