Back to the Ancient times 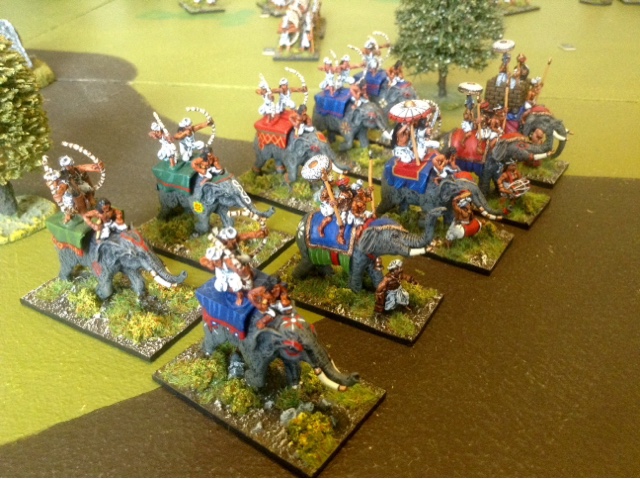 A couple of Sunday's we ran an ancient game using Hail Caesar rules to fight a Alexander sucesser army pitted against the Indian army. As is usual in games I use the Macedonian army I was handicapped with some quite horendous command rolling, in particular my cavalry division which remained staionary for much of the game, which was a crying shame as I had great plans for these cavalry which were heavy armoured and carrying lances  matching the Indian heavy chariots! Still I managed to get into close combat with my Phalanxs with mixed results as my dads shooting with the Indians having a off day. The game ended in a draw which was probably a fair reflection of the game with both sides having lost  a couple of divisions and both sides having sucess in different quarters ofthe battle  field. Although frustrating at times the game was a good fun and it's always nice to see these 15mm troops on the table top. Here are some photos of the game unfolding........ 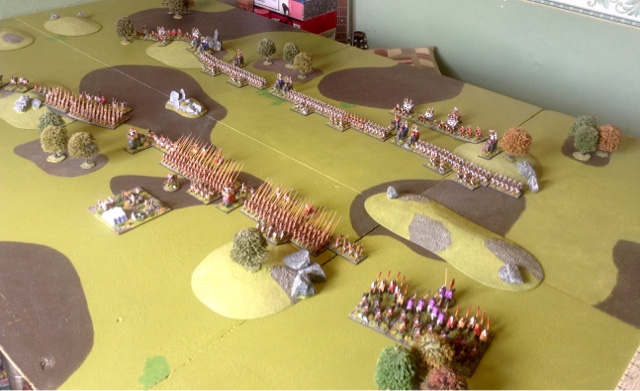 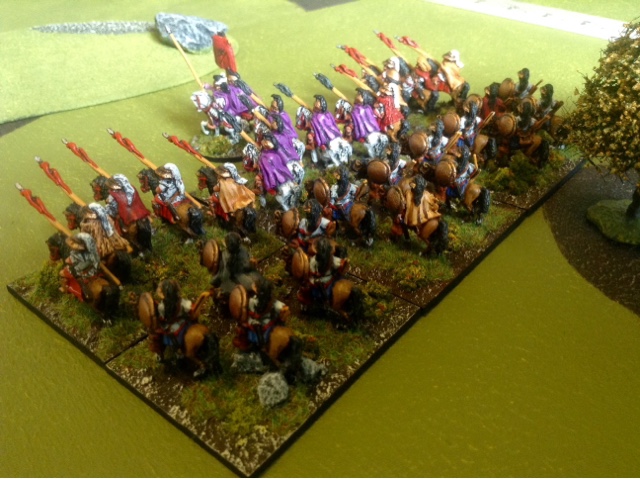 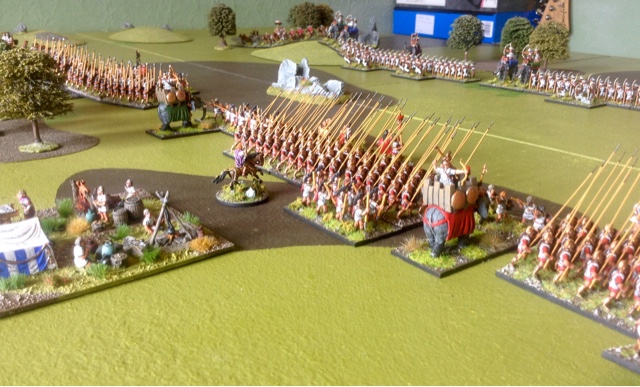 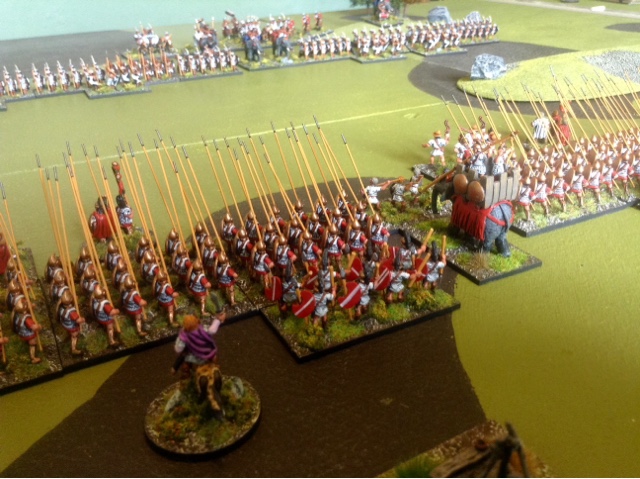 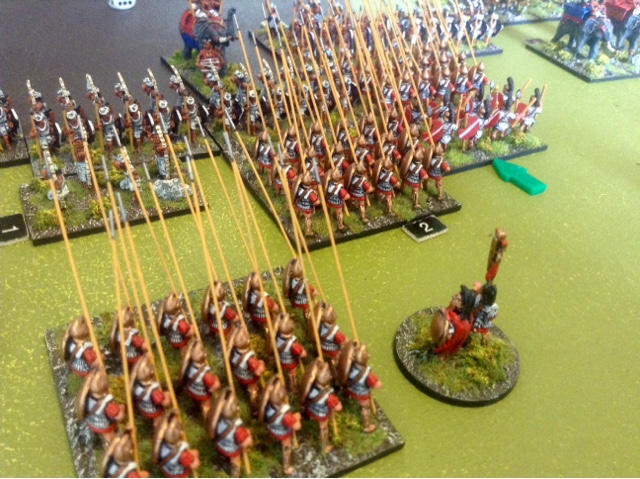 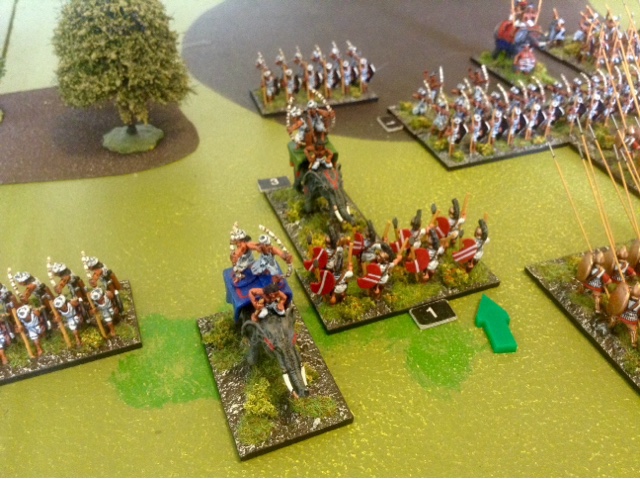 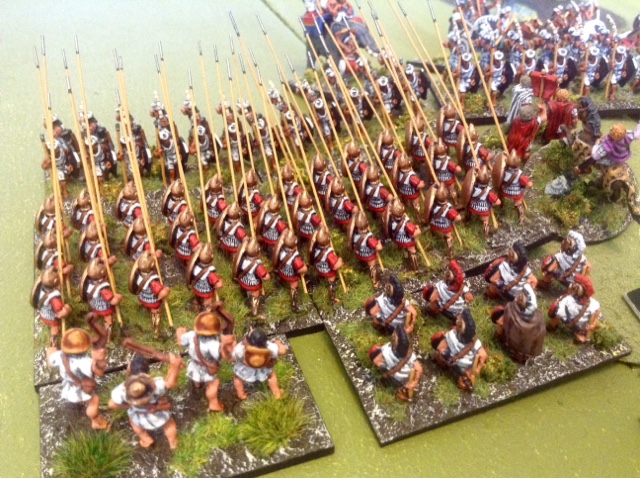 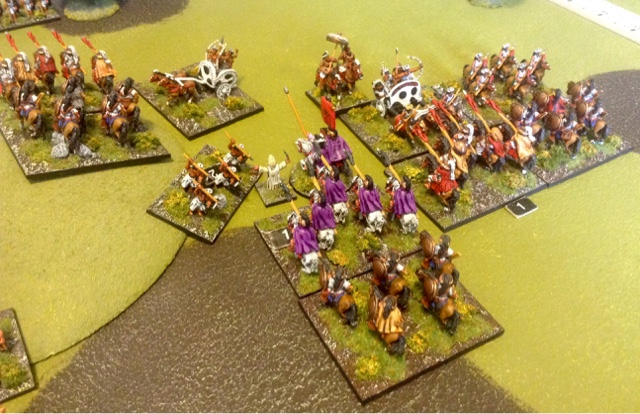 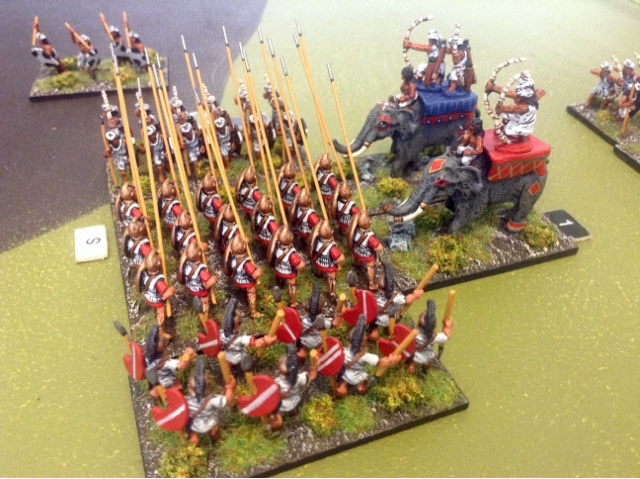 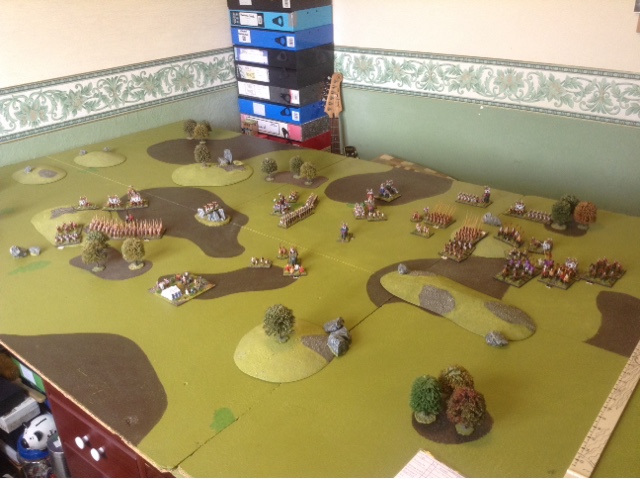 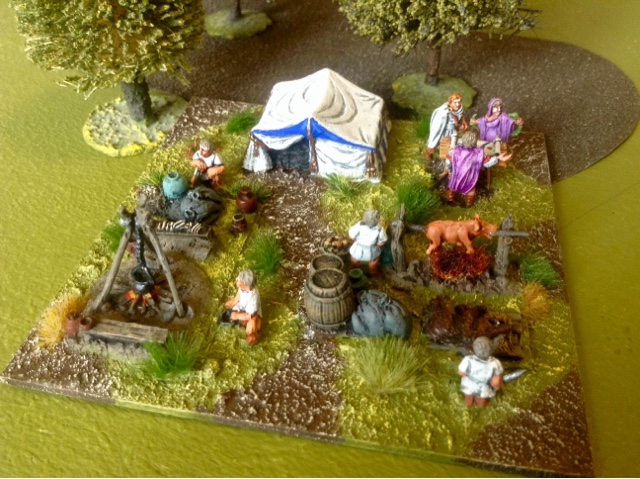 Trying my hand at a Dark ages game.... 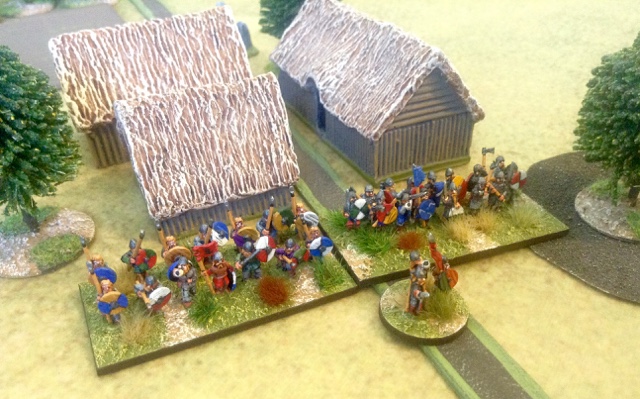 At the turn of the year I decided that my next project would be to do a dark age armie(s) to use with Hail Caesar rules, however after my initial purchase of some 10mm Vikings and Saxons the project got put to one side to be finished? at a later date. My dad had painted what figures I had for the Vikings which amounted for a decent size force to get started with. With this in mind I made a decision to use Sword and Spear (SAS) rules instead of Hail Ceaser as the army I have is ideal for the scale of SAS. My Dad set about painting a Norman army to give my Vikings a opponent while my Saxons remain a work in progress... So on Sunday with myself child free for the best part of the day I stopped painting my Space Marines Blood Angels (Yes you did read that correctly, I'm painting Space Marines and yep games workshop but more on that later 😉) we managed to play a game, I took control of the Vikings totalling around 20 units where as my Dads Normans were slightly smaller by the odd unit.
The Battle lines face off from each other 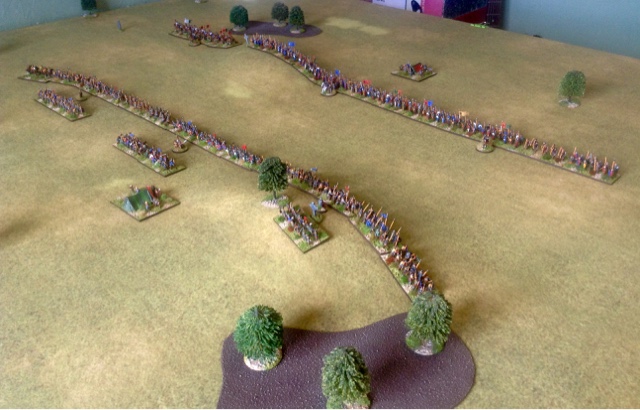 Viking Huscarls in the centre proved to be hard fighting units. 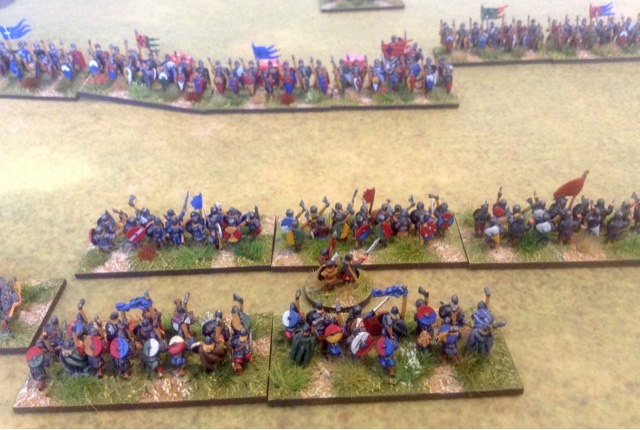 Norman cavalry clash with the medium Viking infantry (bondi), while fresh these cavalry units proved to be very dangerous with their impact rule. 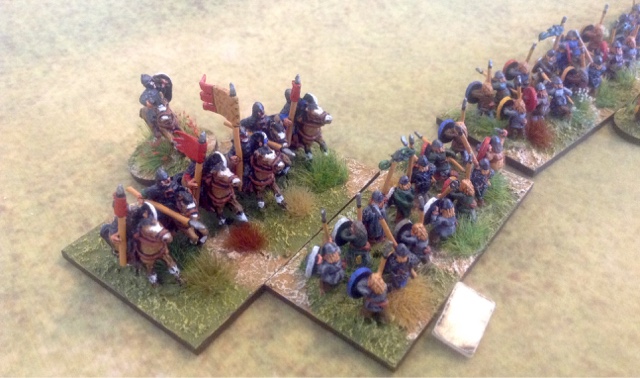 Viking Bondi hold the high ground on the right flank 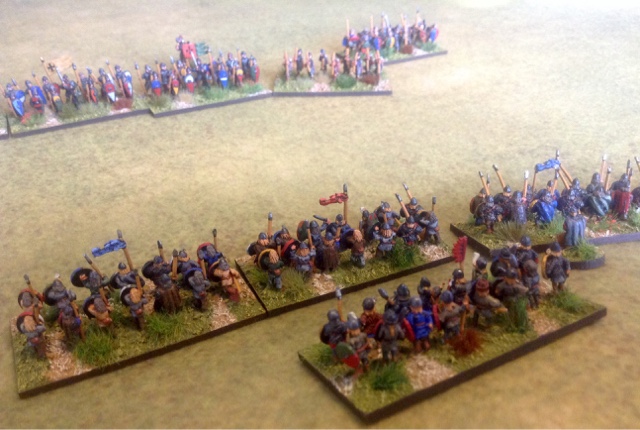 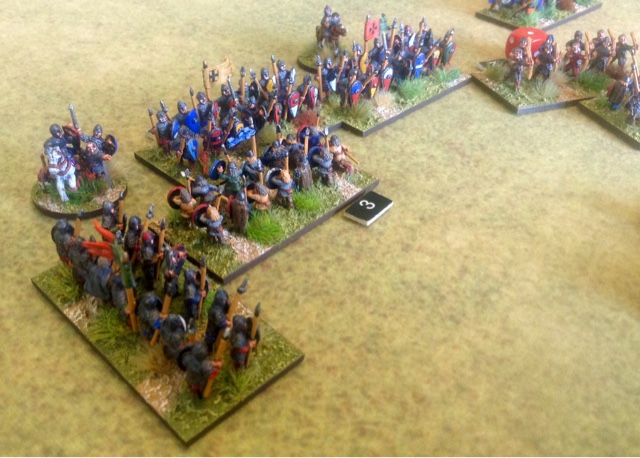 My Viking Huscals smashed through the Norman centre and pursued into the Norman camp area looting the camp before destroying it. 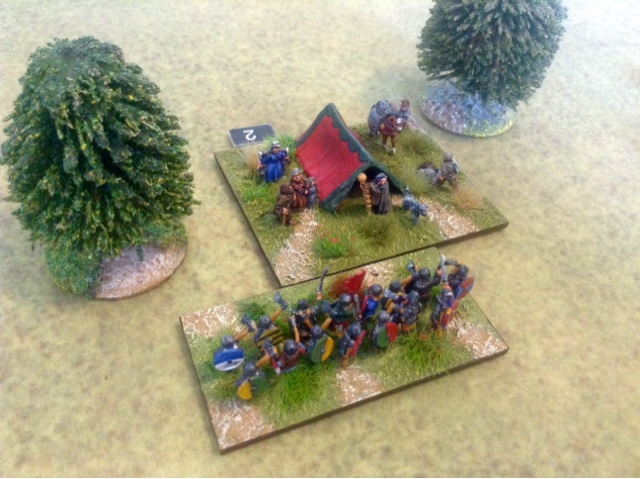 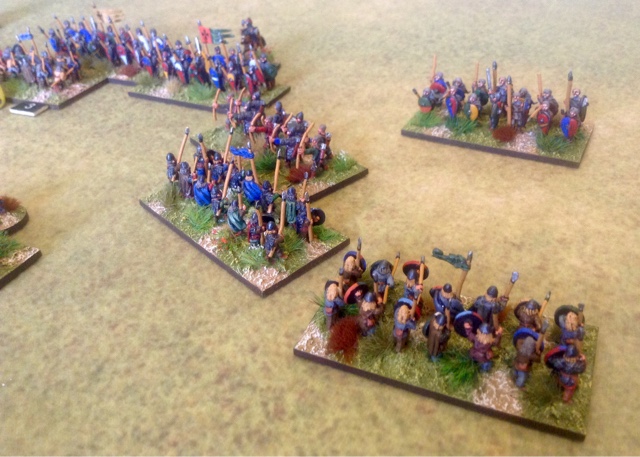 The scarce remains of the battle lines after a couple hours game play saw my Viking army reach its break point, however it was a very close run game as the Normans were only one unit short of breaking. 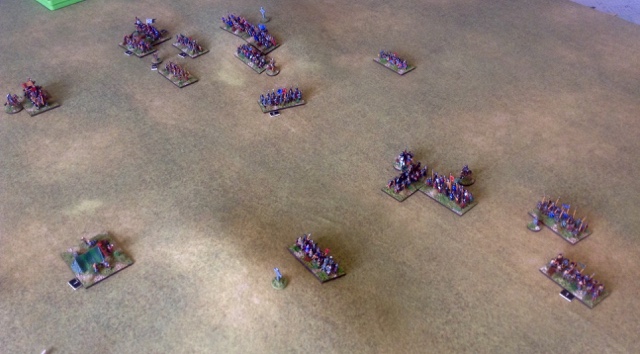 The game played well all though I was incredibly rusty with the rules and game mechanics and as a result of this I made a number of mistakes tactically, especially around how to use the dice which rolled a bonus score. The last turn we played proved to be the most crucial as my dad had managed to pull 6 of his colour dice to my one from the bag and was able to activate the melees that best suited the Normans. If the dice had come out the bag in my favour there was a good chance that I would have been able to clinch the decisive melee to win the game. However I can't complain as I had plenty of activation dice going in my favour over the course of the battle. Sword and Spear are a decent set of rules and now I'm alittle more up to scratch with how to play them our games should be alittle shorter in time to play, which is great for our games when we have limited time to come to a conclusive result. Hopefully I will get another game in a the weekend.
Posted by Neil at 15:18 2 comments: