Over the last couple of weeks I have been purchasing some terrain pieces to extend my Terminator game. I got the ruined buildings made from MDF from a company on eBay for a very reasonable price of £13 and a couple of toy trucks for a wallet busting £1 each from the pound shop! The buildings still need finishing as I've only painted them grey at the moment as I wanted to have a game with them and the trucks  I have painted to look rusty along with the skip. I have set about painting the figures aswell, with 3 resistance soldiers finished including Kyle Reese and 6 terminators done.
The terrain board definetly looking better with the addition of the ruined buildings 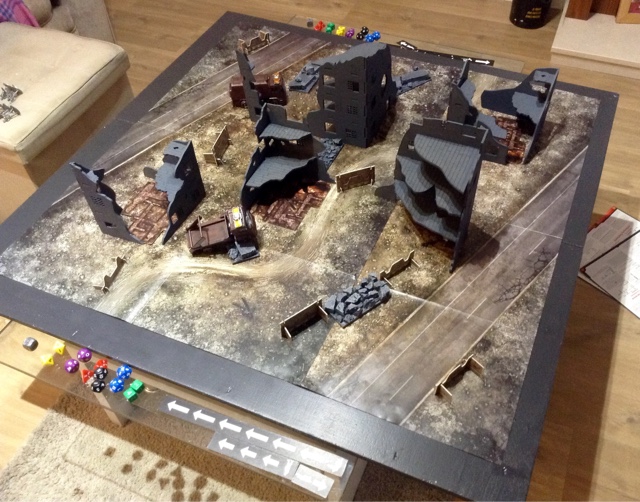 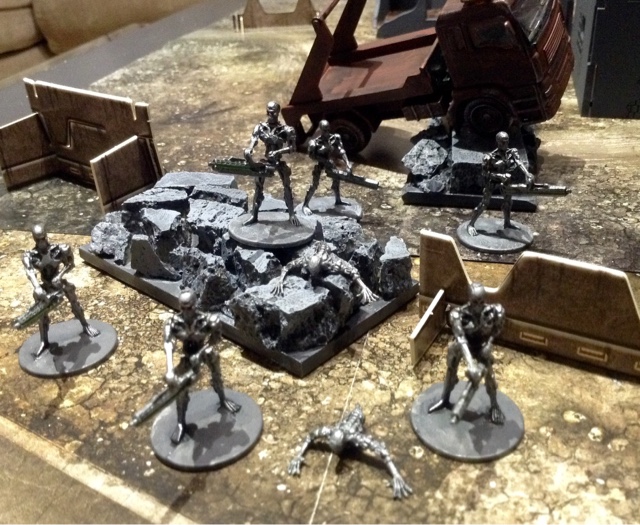 My bargain basement truck adds to the effect of terrain and also acts as a useful source of cover for the humans. 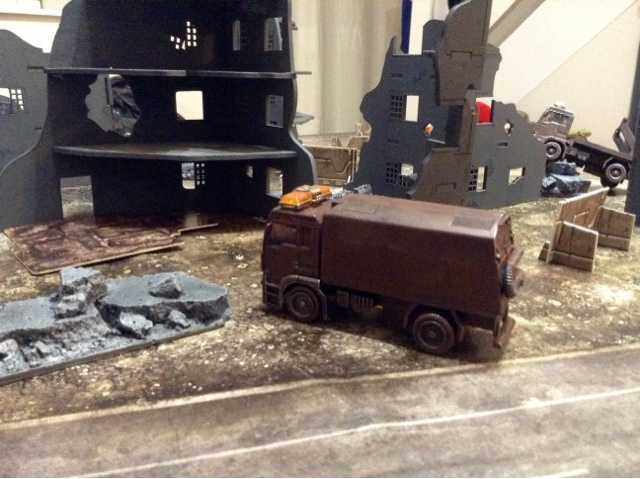 Also having purchased the full Rulebook the game definetly plays a lot better. When I first play tested the game I had originally felt that the game was unbalanced and almost impossible to win with the humans but with the advanced rules and a few mistakes I was making with the basic rules ironed out the game was much more enjoyable and balanced.
Terminators advance through the ruined city streets 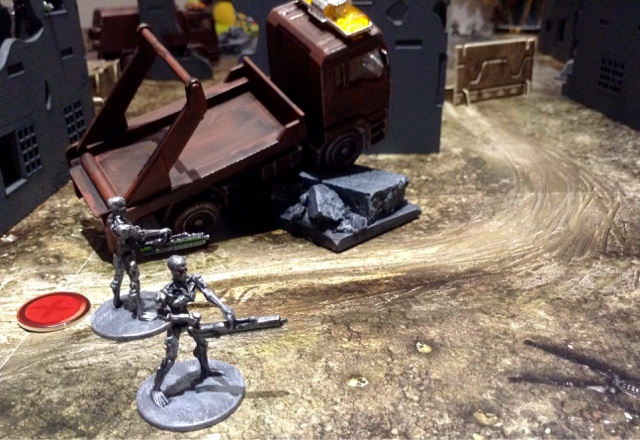 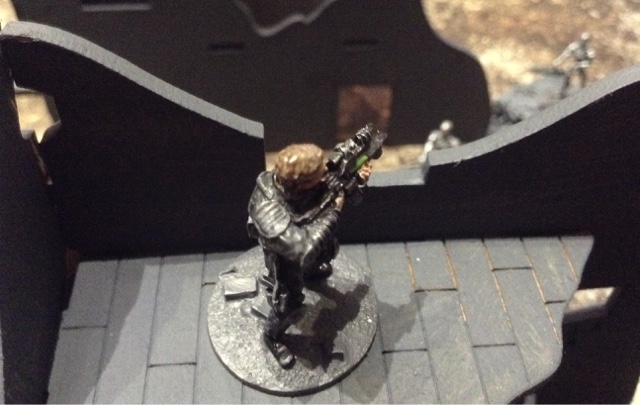 The resistance fighters finding cover in the streets 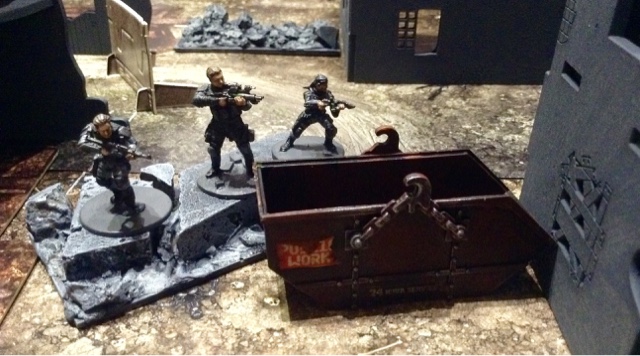 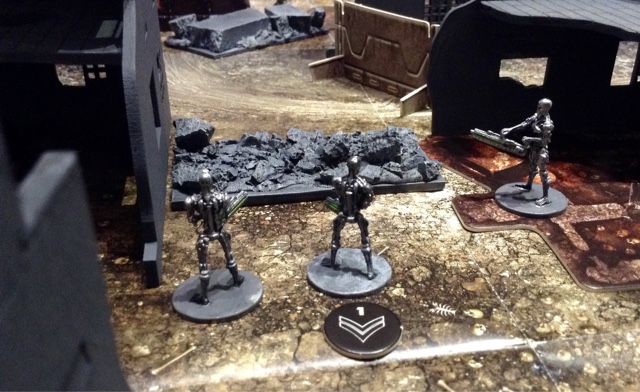 With the board set up I managed to grab a 500point game with my partner on Sunday evening. Using the new rules definetly added to the game and by the end I had managed to win with the humans,hurray! Although some quite shocking dice throwing from Catherine (4 times she rolled a 1 on a d20, the only result which destroys you!) definetly contributed to this. I have ordered a few more minitures for the game although I have a feeling I'm going to be wait while for these as they were out of stock. In the mean time I have plenty more terminators and humans to paint,..... 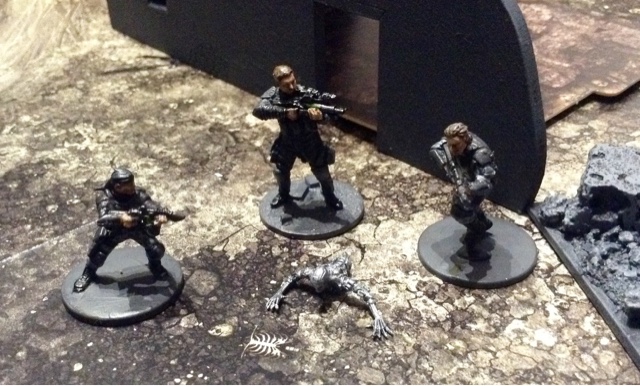 The Battlefield after deployment 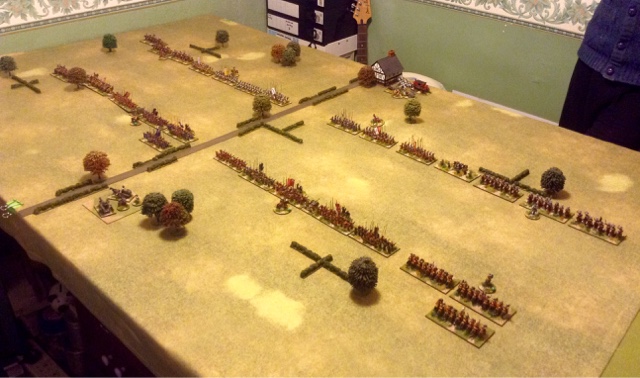 Our last game saw us turn our hand to 1664 for a English Civil War (ECW) game using the excellent Baroque war games rules based on the Impetus system. My dad has recently rebased his 15mm ECW armies for these rules from pike and shotte and i have to say how wonderful they looked. I really like the look of units having all their figures on one base and in in particular the Pike and musket units looked really effective, well worth the time and effort my dad had put in rebasing them! On this occasion I took command of the Parliamentarian force totalling around 900 points which included two commands of cavalry and two commands of foot with more than half the force been C class troops although one of my cavalry commands was the elite ironsides with the motivated rule. My dads Royalist army was very similar although he had a couple less pike units although most of the Royalist army were B class troops.

The Hard hitting Ironsides are ordered to sweep away the royalist left flank, easy then???? 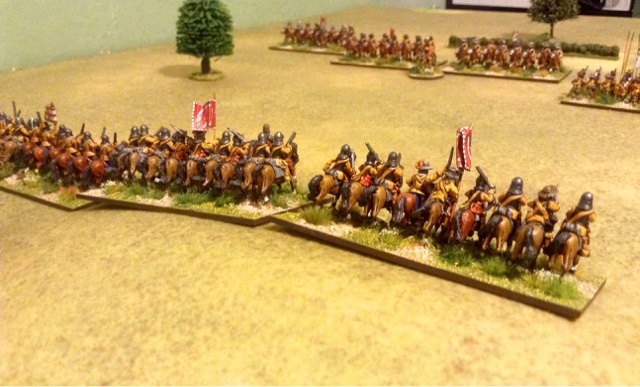 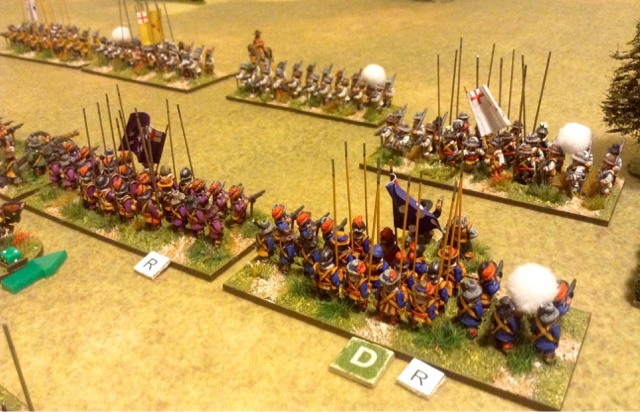 Royalist gallopers over come the close range pistol fire to quickly sweep away the roundhead reiter cavalry command with ease. 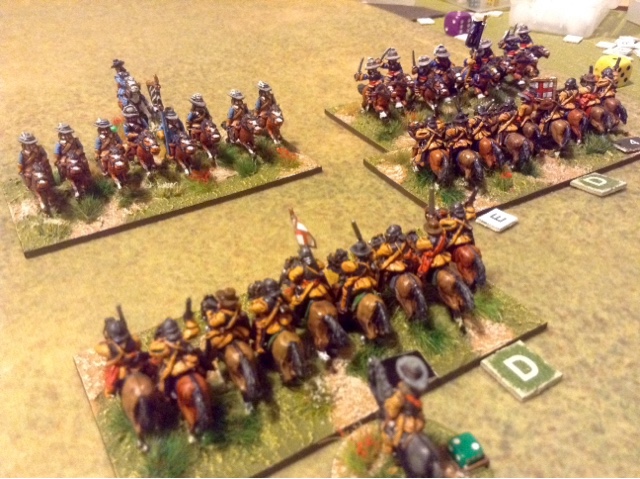 The Roundhead pike advance towards the the royalist centre, an area which was to see heavy fighting throughout the course of the battle 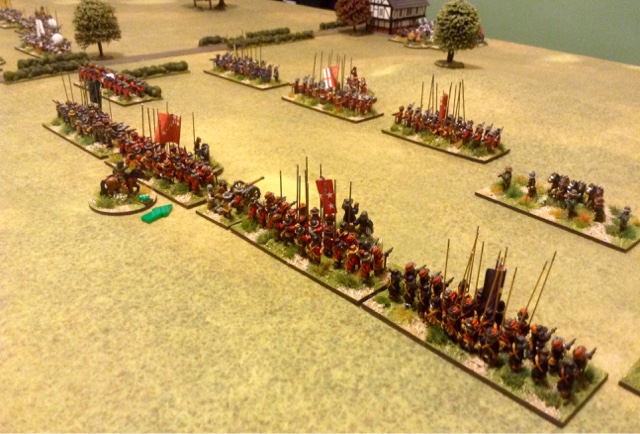 The ironsides struggle to break the royalist cavalry despite having the impetus and become involved a long tussle which was to last for most of the game. Eventually the Royalist cavalry broke my ironside command who once they had lost their commander became somewhat isolated and vunrerable. 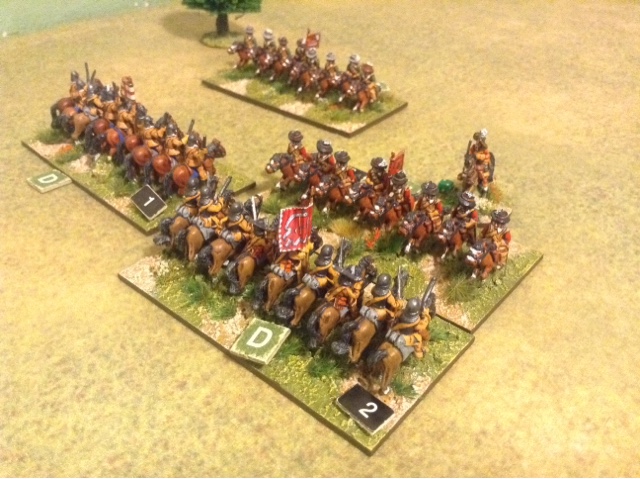 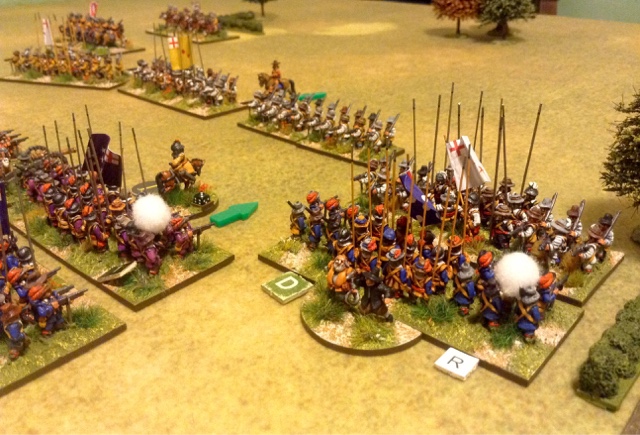 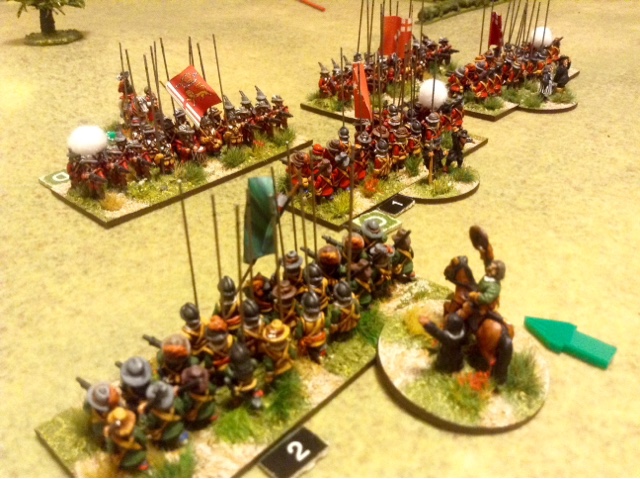 The royalists infantry command collapse on the left flank as the parliamentarians get the better of the close combat, although the fight had continued over a number of moves as the Royalist morale just about held on. 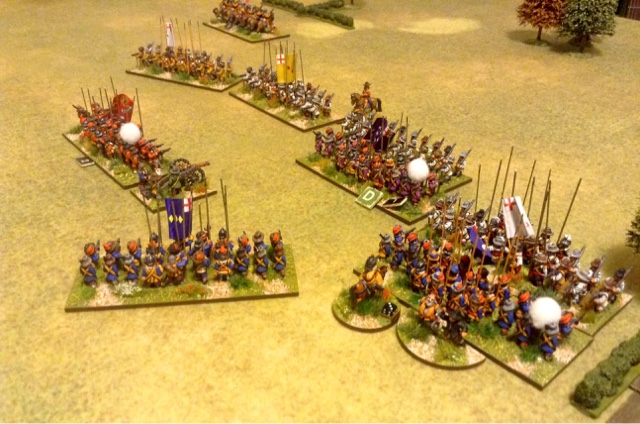 After sweeping the roundhead cavalry away the Royalist gallopers turned onto the flank of the parliamentarians centre and late in the game they managed to flank a unit of musketeers which could not find it in themselves (unsurprisingly) to stand up to the charge, with this unit broken the parliamentarian army had passed its break point. 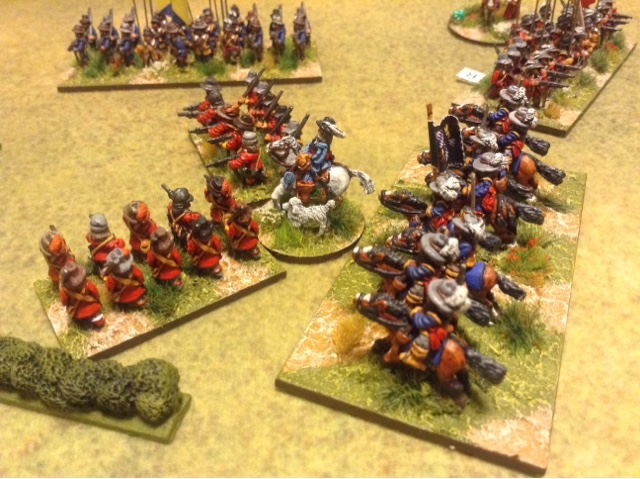 The final battlefield position shows how destructive the game had been. 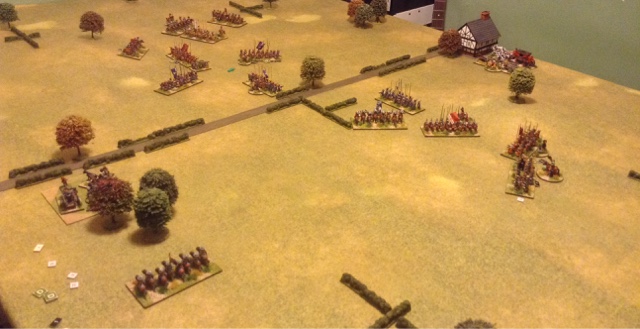 Although the game had ended in defeat it had been a cracking affair. The Baroque rules have really grown on me and i have definitely developed a better understanding of how they work. The main reason for defeat was the loss of both cavalry commands, especially the Ironsides who i had pinned my hopes on smashing the Royalist cavalry. My  Reiter cavalry command (which was made of  C Class troops) who i hoped would at least hold the Superior Royalist cavalry at bay for a few turns were chased from the battlefield very early and cheaply allowing my dad to turn my flank on my infantry in the centre. Some cunning use of 'destiny'dice had kept my dads cavalry in the fight on three occasions against my Ironsides as on each occasion without the re roll of their discipline test the units would have routed, which would have allowed me to turn on the royalist flank, I on the other hand rolled one roll of destiny'and got a worse result than the first! I think i had just about edged the fight with our infantry with my sole Veteran pike and musket unit proving to be very reliable (it with stood been charged in the rear by a unit of rampaging gallopers,actually winning the melee) with the iron officer trait proving very handy on occasions, and at the games end when my army broke my Dad was not to far himself from reaching his army break point.

The Spoils of War! The roundhead baggage camp about to be overrun as the Parliament army breaks and flees the field 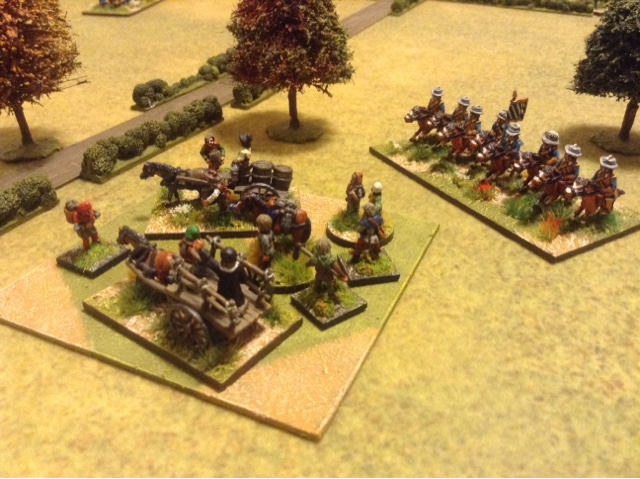 At the weekend I had a very enjoyable day out  to Donnington park for the Derby Wargames show with my dad. Once we arrived after a small detour when we exited the roundabout at the wrong exit ( we both obviously blamed each other as you do )we joined a largish que, however This detour and extra minutes to our journey was a small twist of fate as the gentleman behind us in the que to enter the complex eyed my dads ECW troops he was going to sell at the flee market and quickly snapped them up, so it turned out not to bad! Once inside we grabbed a table on the flea market and quickly sold off our remaining items which was a bonus as it allowed us more time to get around the show. As for the show its self it seemed to be pretty busy. I had a good luck around all the trade stands to see if anything caught my eye and there was certainly plenty of trade. First up I bought the new osprey rule book they who would be kings as I was interested to see how the colonial games could be played at a smaller scale. I couldn't go to a show and not buy at least a couple of ships for my X wing game so  I opted for an A wing and a Z-95 Headhunter. Unfortunately I was unable to find anything for the warlord games terminator game apart from the core set which was a shame as I was hoping to add some figures to it and to get my hands on the full rule book. When I explained that I wanted the rule book seperate at the warlord games stand I was told that they don't carry the stock but they could order it for me there and then,which I thought ok that's not to bad. When I said that the book was £15 at the moment on the Internet the man serving at the stand said he for a one off would give me the core set which included the full rules and a Carl Reece model as an extra for the £15 rather than the £30 they were selling it for, with out hesitation I shook the mans hand handed him the money and left feeling very happy with myself, so a big shout out to Warlord games staff who were really friendly and helpful. I also picked up some more Mahdists packets which I preordered from Pendraken and some more explosion markers for destroyed tanks.(every year I keep meaning to get a packet of these and always forget ) finally I also picked up some rumble scenery to use with the terminator games from a cool little stall selling sci if terrain. All in all I was pretty happy and I still had a rare sight of ten pound notes in my wallet which doesn't happen to often! Finally I though the games were of a good standard, I would have liked to have studied them in abit more depth but time was short so I did by best to see as many as possible, I even thought the standard of the participation games was very good, including the small skirmish games, it seemed like alot of effort had been put into the terrain and set up areas. I think I will give the best game to Like a stone wall group for there battle of Hastings which I really would have liked to play and a very close second was the Rorkes drift game by the Boondock Sayntes which was very well done. My dad went for the Battle of Rain by Wesbury wargames for the best display game followed again by the Rorkes drift game. All in all a very good show, even though we walked out into torrential rain which literally soaked us to the bone making the car journey home a tad uncomfortable, although at least we didnt take any detours on the way back....
My purchases (minus the pendraken Mahdists) 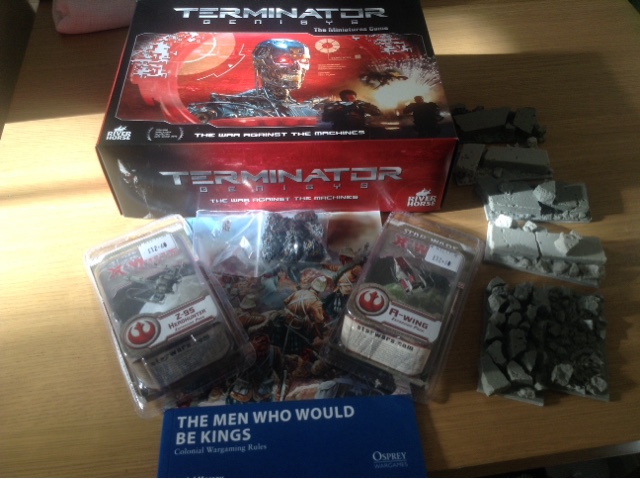