My French army although not complete managed to get its first run out at the weekend although it was not to be a glorious debut. I will post a AAR on the game a little later on, in the mean time I have taken a few pictures of how the army is looking. 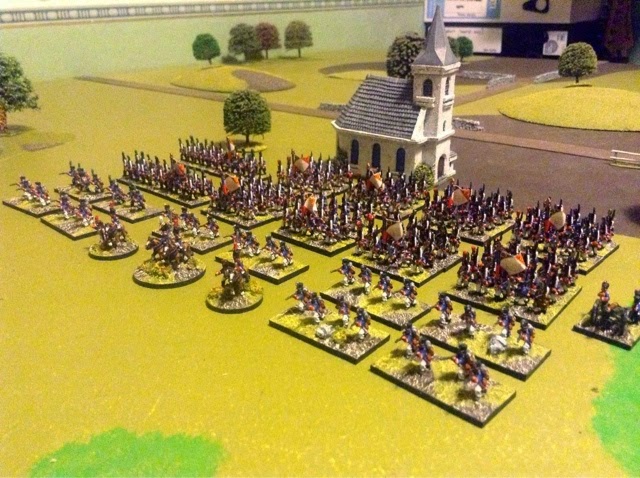 Up First is my 1st division of infantry. This consists of 2 brigades each made up of 4 Battalions line and 1 Battalion Light. Each Battlion also has a stand of skirmishes if you wish to use them. There is a command stand for each Brigade and also a Divisional commander. 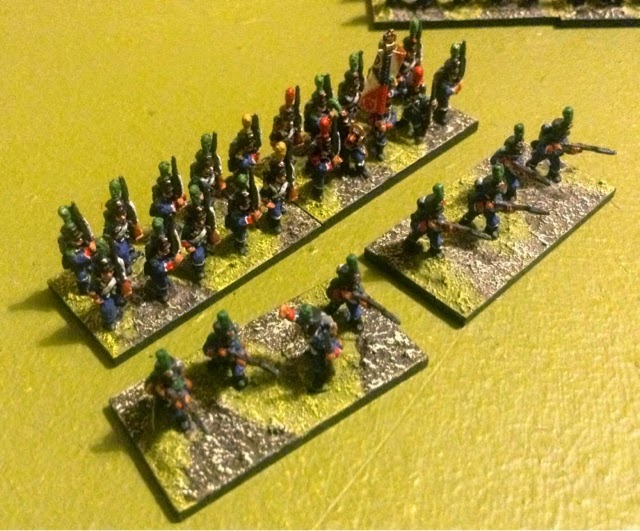 A light battalion with the optional skirmish formation. 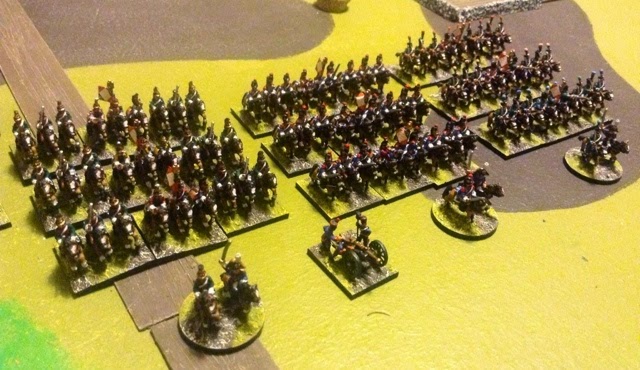 The Cavarly corps currently consists of 3 Brigades each with there own commander, two my horse artillery guns have yet to be painted. 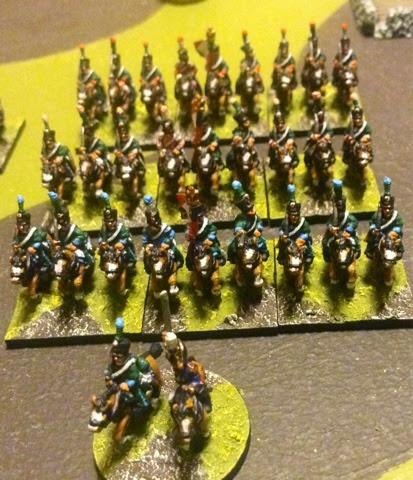 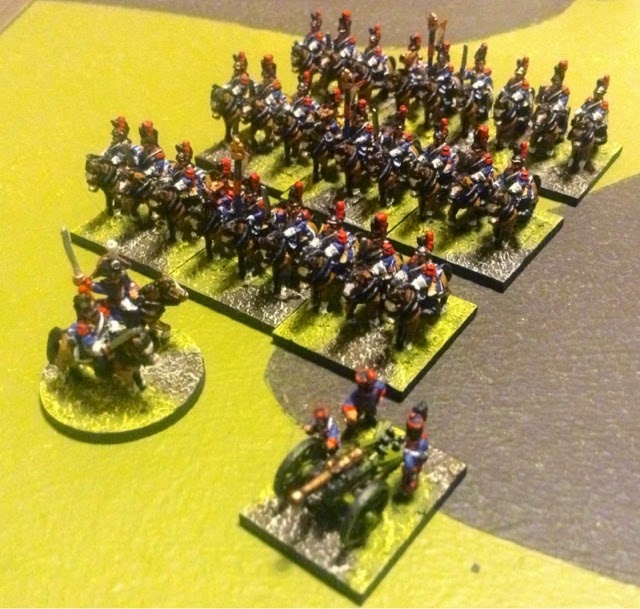 And finally the 3rd brigade (heavy) is 3 regiments of Cuirassiers, with the Horse artillery. 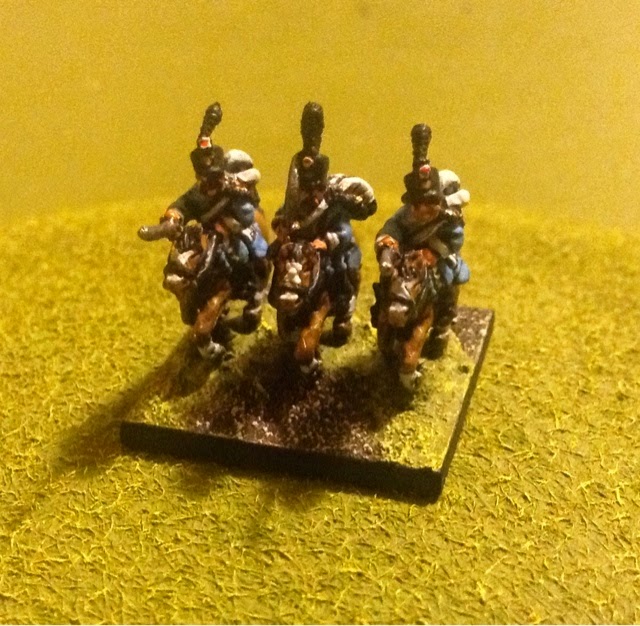 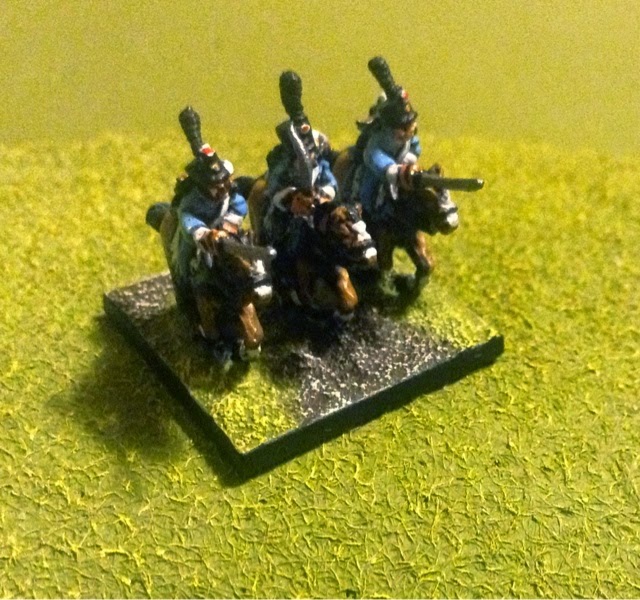 All the figures are Pendraken 10mm and are based for Blackpowder. This week end will see me hit  Donnington Park for the Derby wargames show, here I will be picking up my old guard battallions for use as the 3rd infantry Brigade and another 3 regiments of Cuirassiers aswell as limbers which i have pre ordered from Pendraken. Also while at the show ill be looking to add some more infantry, possibly in the form of some Italian infantry to add something different to the look of the army and also some characters in the form of be great man himself Napolian etc.
Posted by Neil at 13:25 3 comments: 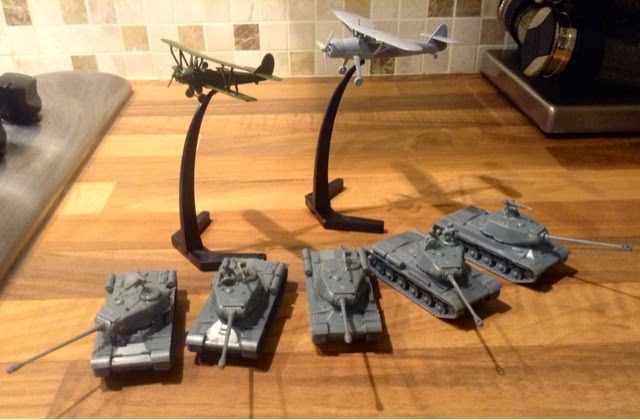 Plastic soldier had a offer of 25% off last week so I took advantage and bought myself a box of IS-II heavy tanks. The box contained 5 IS-II with options to make command tanks and were a doddle to assemble, especially seen as those tank tracks were all one piece now. These big boys will be used in Fall of the Riech games. Also I noticed while on the plastic soldier website that they sold Russian and German spotter planes. 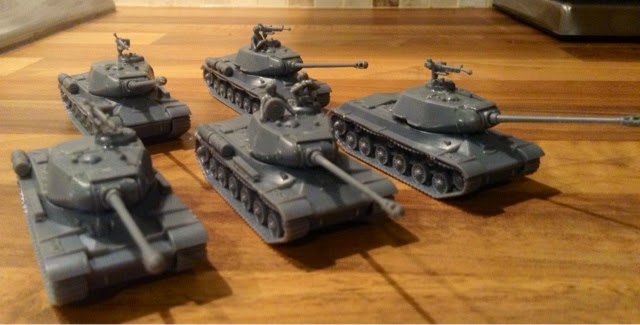 The planes are made by Zvezda, the German plane was ok to assemble but the Russian PO-2 was a nightmare, very tricky to get the wing stabilisers into position as the plastic was very brittle. I used the spare tank commanders from the IS-II box set to convert a couple of pilots for the planes and overall I'm pleased with the purchase(s), in all the order came to just over £21 with p&p hich you can't argue with.
Posted by Neil at 13:45 No comments:

Finding myself dipping my toes into the world of Napolionic wargaming I thought it best to order myself a couple of books to read on the period. 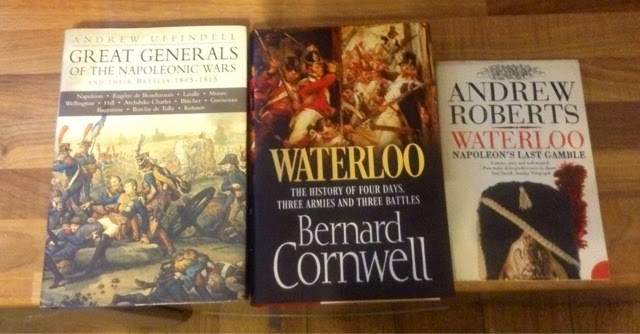 The Great generals of the Napolionic war and Waterloo Napoleons last gamble I picked up on eBay for less than a fiver with postage and today I picked up Bernard Cornwells  Waterloo on my dads recommendation from Sainsbury's for a tenner.  These should keep me busy for a few weeks, or longer if I keep falling asleep on the bus on the way home from work which I have a habit of doing when reading!
Also I have ordered my next batch for my French army, this will see the old guard added to my army along with 3 more units of cuirassiers and all the limbers I need for my artillery. I still intend to add some more bits and bods but i will wait for a couple of weeks for the Derby show to attain these.
In the mean time I shall get cracking with some reading.....
Posted by Neil at 10:47 2 comments:

"The Battle of Cedar Mountain also called Slaughters Mountain and Cedar Run, was fought on August 9, 1862. Although not an extremely well known battle in the Civil War itself, the battle proved to the Union Commanders that Confederate leader Thomas Stonewall Jackson was a force to be dealt with."

Last weekend saw me take command of 3 confederate divisions against my dads 2 divisions of Unions in our rerun of the battle of Cedar Run. One of my divisions was held in reserve which I would have to roll for to arrive. The objectives were the 3 hills in the Union deployment zone, each one was worth 3d6 victory points and on top of this if the unions could get any troops beyond the road and into the fields they would be worth 1d6. In these rules all casualties count towards the victory total aswell. Time was also against the confederates, at the end of each game turn a d6 was rolled, when this goal reached 16 the game was over due to night fall. It would be therefore vitally important that the confederates attacked the positions as quick as possible. 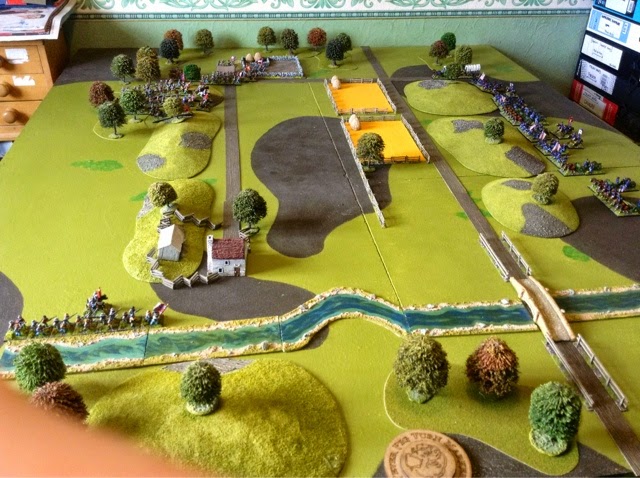 On the confederate left columns of infantry run towards the hills where the union infantry will no doubt be deploying in their turn. The Artillery deployed on he hill to give some covering fire. I wanted my first division to move out wide left through the fields and woods to flank the union position, seemed good in principal but in practice thus proved to be alot easier said than done. A couple of not so clever command rolls saw my raw troops from this division become somewhat lost in the woods, the remainder of the division launched the first of (many) confederate attacks against the first hill. 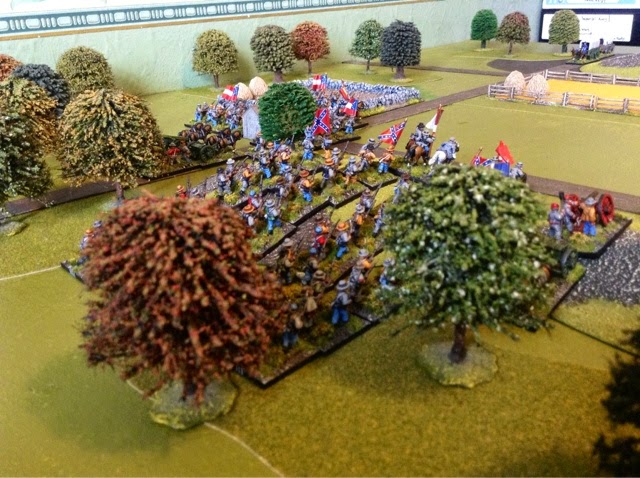 First blood to the Union as the Rebs are broken in combat, a very good morale check for been charged ( I scored 15 but my dad managed to roll 11 on his dice, a roll of 9 or less would have seen the union troops scamper from the hill) and some quite unspectacular attack dice from me saw the Rebs well and truly routed.

My second division was making very staggered progress, coming under heavy artillery fire and constantly having to fall back. My dad sensed a break through and pushed his infantry from the ridge of the hill towards the fields. At the end of the second turn I had managed to roll 2 scores of 6 for the time passed' the sun was already beginning to set! 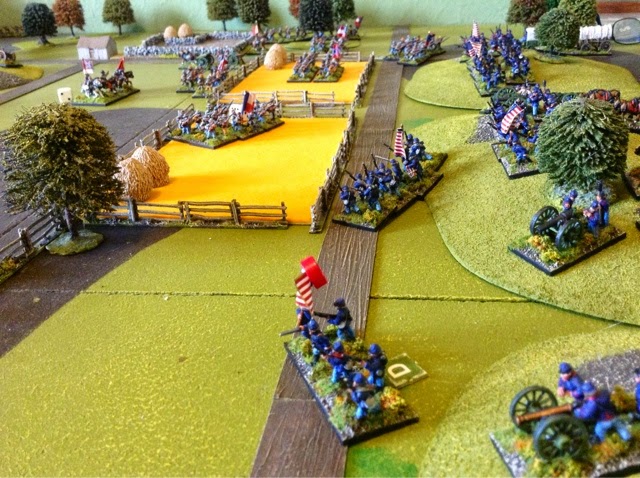 Again after a short fire fight I charged the hill again with a fresh brigade only to suffer th same fate again. Despite scoring well on the charge morale my dads wavering test once again saw a result of 11 and the Yankies stood firm. Once again I rolled dreadfully poor for combat and was put to flight again in identical circumstances. The hill was still in Union hands. 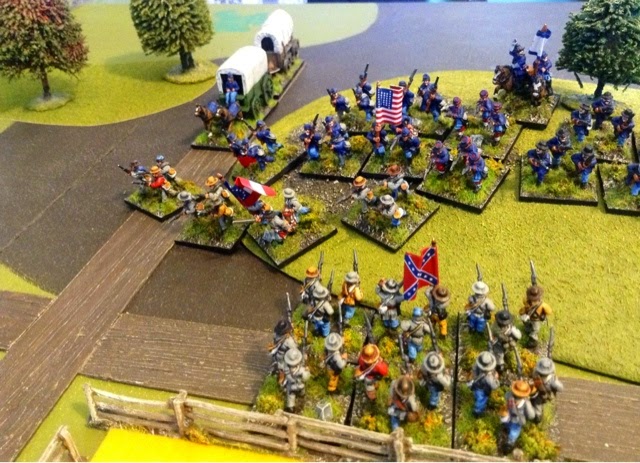 Although my reserves had arrived on turn one bar one lost gun,  they had made little progress coming under a hail of artillery fire constantly disordering them impeding their movement. One brigade rushed up the river bank to threaten the union left flank. This time the end of turn roll saw  a 1 rolled. There was still hope. 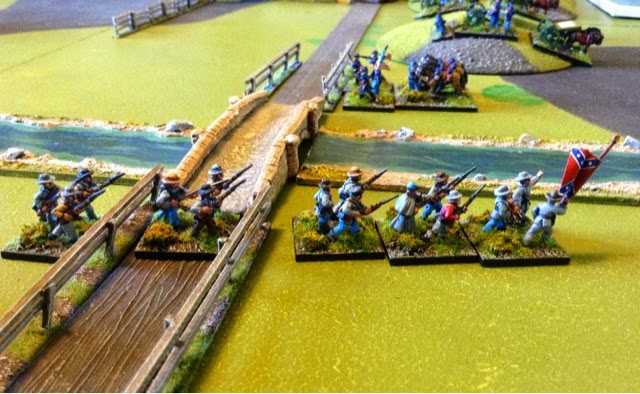 A final attack was launched against he hill. The raw confederates had finally reached the union flank but did not generate enough points to reform and charge the union flank. A third frontal assault was launched with close quarter shooting as I made one last attempt to claim at least one of the hills. 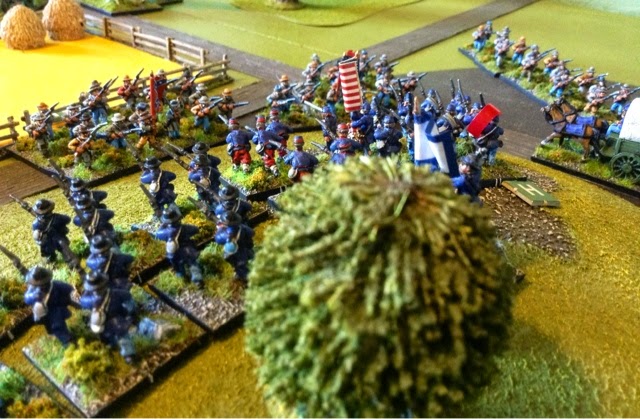 My third division just couldn't get moving, well not forward anyhow and continued to retreat in the face of the Union artillery fire, despite their guns now been low on ammo. This all but finished any chance of an attack been able to be launched on this side of the field. 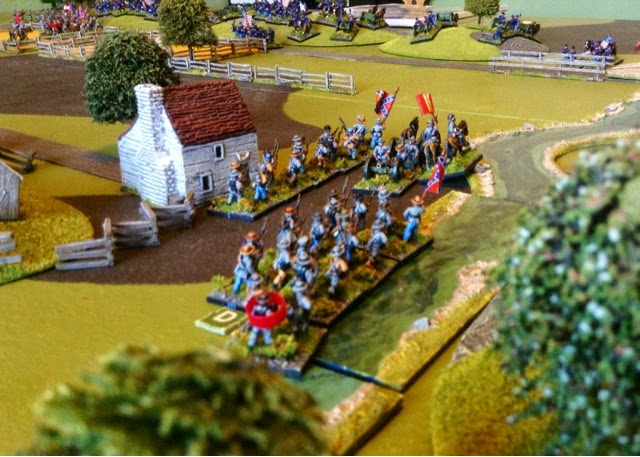 The Union troops consolidate their position in the fields while the artillery which is all but low on ammo continues to bombard the confederate lines with good success. The attack for the far hill continues in close quarters. The time passed saw another 1 rolled so I had at least one more turn to make my break through. 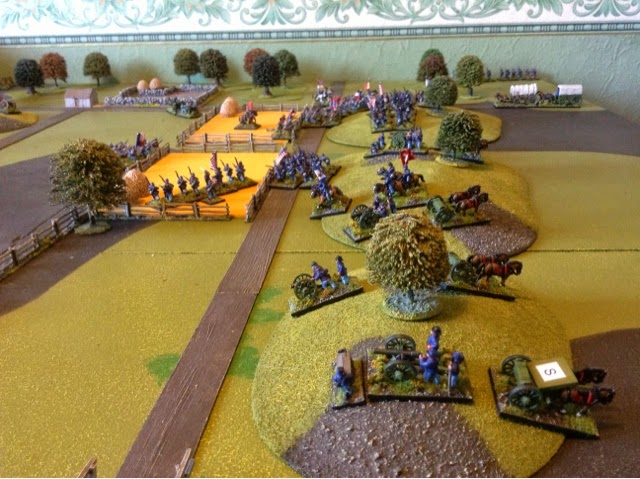 My texans try to force the union brigade from the fields but there shooting proves ineffective, the union troops consolidate there positions with the support of the artillery on hill despite all the above mentioned becoming low on ammo. 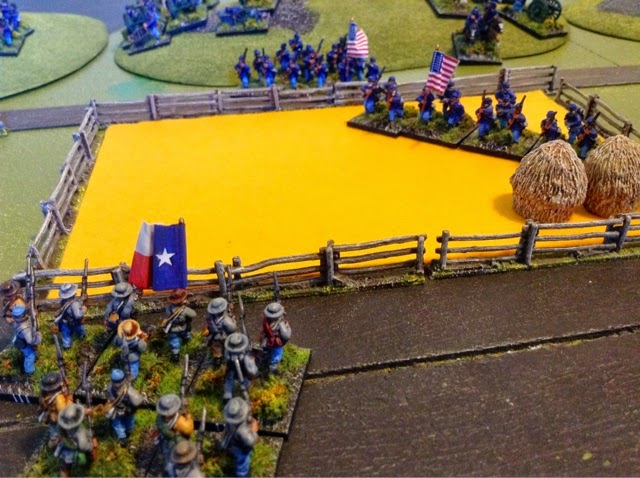 My third and final attack falters once again and despite now finally been in position to surely take this hill the battered remains of the Union brigade still hold the hill when the end of turn roll sees a 4 rolled and the sun go down and nightfall descend on the battlefield. 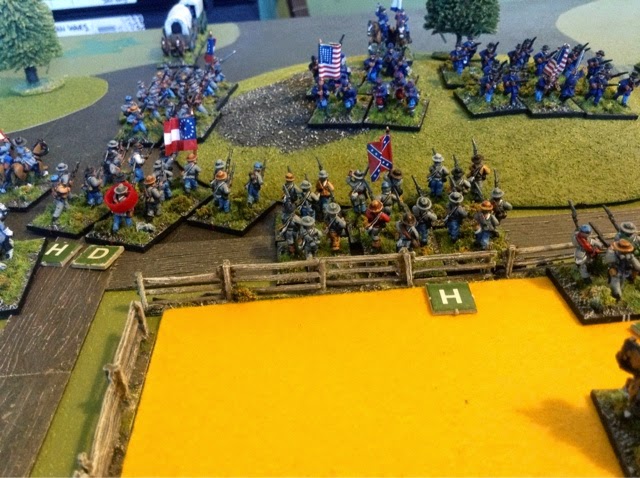 On totalling the points it was obvious who had won, the score difference was in excess of 50 which ment my army had routed from the field along with my General to save themselves while the Union forces had managed to repel the confederate attack with great success. 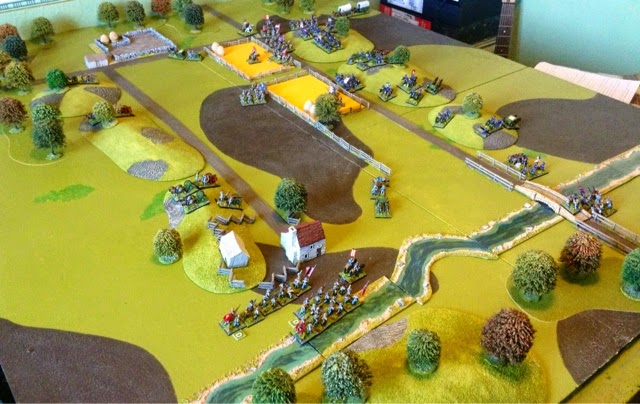 The Union forces just proved to be to tough on the day and no matter what I threw at the hill I couldn't drive them away. The Confederates suffered badly to artillery fire for much of the  game, the failure of the third division to attack the right flank the guns were able to concentrate with shooting up the advancing confederates into centre of the table. Although the confederate forces out numbered there foe it was still a tall order to be able to take the hills which proved to be a formidable defense line, true to the real battle I suffered heavy casualties but unlike Thomas Stonewall Jackson I was unable to win the day.
Posted by Neil at 14:22 4 comments: